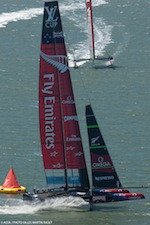 The Kiwis set the mark on the first reaching leg as they sailed alone around the course to collect another point in the Louis Vuitton Cup for challengers. The scheduled opponent, Artemis Racing, has yet to race as it works to get its second boat launched following the fatal capsize of its first boat on May 9.

The Kiwis' top speed translates to 81.7 kilometers per hour or 74.5 feet per second. The wind speed on the leg peaked at 15.8 knots.

The high-performance cats generate their speed thanks to mainsails that are shaped and perform like jetliner wings, and hydrofoils that reduce drag. The boats lift onto hydrofoils as they speed downwind from just off the Golden Gate Bridge to near Alcatraz Island.

"By far this is the coolest, most fun boat I've ever sailed on," said Emirates Team New Zealand wing trimmer Glenn Ashby, who watched Thursday's race from a chase boat. "Doing 40-plus knots reaching and downwind and low-to-mid-20 knots upwind, there's no other boat as a sailor that you'd ever wish to sail on at that moment. The boats are getting faster and faster. Every month, we're getting quicker. If we had another six or eight months of development we'd probably get another three to four knots quicker. The feeling sailing downwind is surreal, covering ground that quickly."

Emirates Team New Zealand earned its fifth point of the series in five starts, four of which have been unopposed.

The Kiwis are closing in on advancing straight to the Louis Vuitton Cup finals starting Aug. 17. That would leave Italy's Luna Rossa to face Artemis Racing in the semifinals beginning Aug. 6.