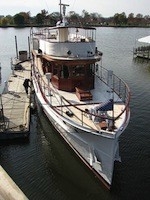 WILMINGTON, Del. -- A Delaware judge on Thursday ordered the owner of the former presidential yacht USS Sequoia to sell the boat for $7.8 million, minus legal fees and loans, to a Washington-based investment group after a legal battle in Chancery Court.

Gary Silversmith, the Washington lawyer who owns the boat, argued that FE Partners used a $5 million loan agreement in an attempt to wrest control of the 104-foot yacht, which has an illustrious past.

President John F. Kennedy celebrated his last birthday onboard, and President Richard M. Nixon spent a night aboard the vessel in 1974 before resigning the presidency. President Jimmy Carter sold the ship, and it has passed through a series of private owners.

Silversmith, who has owned the yacht since 2001, turned to FE Partners to secure a $5 million loan to cover debt and expenses.

Chancery Court Judge Sam Glasscock ruled in favor of FE Partners, saying Silversmith must give the investment group the option to buy the boat for $7.8 million, minus other obligations, including legal fees and outstanding loan balances.

FE Partners, which is backed by wealthy mining magnates in India, is expected to exercise its option to purchase the boat, an option that was included in its original loan agreement with Silversmith. A spokesman for FE Partners said the group intends to keep the boat docked in the United States.

"For months, the owner of the Sequoia has tried to use the courts and media to defame and pressure us," FE Partners said in a statement. "During the litigation, he fabricated crucial documents, engaged in witness intimidation and destroyed computers on which critical evidence was stored."

In his order, filed Thursday morning, Glasscock said the "Sequoia parties fraudulently induced" FE Partners to provide the loan, including by producing a fabricated letter from Russian gas company Gazprom to buy the yacht for $20 million. Silversmith said he did not know the letter was fabricated, and submitted evidence to the court that he says proves another party was responsible for drafting the letter.

Silversmith said he could not afford to keep paying legal fees on the case.

"I'm disappointed but realistic that we cannot afford to keep litigating," Silversmith said. "We hope that the lender, FE Partners, does not buy the Sequoia, but they will have the legal right to do so."