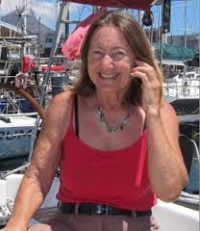 Jeanne crossed the finish line in Victoria Monday 8th July between 2 and 3 am, and she tied up safely in Victoria Harbour.

Jeanne set out from Victoria's Inner Harbour in her 11-metre cruiser Nereida on October 2012, on her third - yes third- attempt to achieve a non stop solo circumnavigation.

The pre-dawn arrival ended several days of anticipation as light winds along the west coast of British Columbia stalled her return, which was first expected on July 1st, then July 5th, but the goal became frustratingly elusive as she was becalmed for several days. Determined not to give up, she obtained her current boat, also called Nereida, and began again. This time she suffered a knock-down while trying to round Cape Horn in violent weather and limped in to Ushuaia to repair her boat.

While the 'non-stop, unassisted' goal had once more escaped her, she sailed across the Southern Atlantic to Cape Town, realising on the way that, on arrival in Cape Town she had crossed her outbound path and become the oldest female to complete a circumnavigation (with stops). This still wasn't good enough for this indomitable sailor. She sailed on to Victoria in Canada to prepare her boat once again for the elusive non-stop journey.

Congratulations, Jeanne, the sailing world, loving a free spirit as it does, is proud of you.