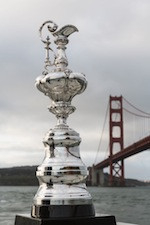 While America's Cup organisers continue their review of this month's fatal Artemis Racing tragedy, at least one of the challenging syndicates has flown in the face of requests to stay off the water.

Last week, Golden Gate Yacht Club vice commodore Tom Ehman assured the sailing world that the event would proceed, despite the death of Briton Andrew "Bart" Simpson when the Artemis boat capsized on San Francisco Bay on May 9.

After its first meeting last Friday (NZT), the America's Cup Review Committee asked teams to stay off the harbour this week, a deadline that ends on Friday. It took less than two days for Luna Rossa Challenge to thumb their noses at that request.

At the time, Luna Rossa president Patrizio Bertelli was the most vocal in his support for the review and called for tougher limits on race conditions during the event, even threatening to withdraw his team if safety measures were not introduced.

"We are pleased that Luna Rossa has already submitted its suggestions to the review committee," said Cup organisers in a statement issued after meeting with teams over the weekend.

"We are, however, disappointed that Luna Rossa indicated that it might not follow the review committee's recommendation issued last evening that teams not sail in San Francisco before May 23 to allow the committee time to make further recommendations.

"We note that Luna Rossa has already sailed its AC72 yacht in Auckland for some 40 days without incident and is now prepared to sail in San Francisco Bay."

Sure enough, the very next day, the Italian syndicate were out on the harbour. Sailing in winds ranging from 3-12 knots, the crew spent three hours putting the craft through its paces and posted pics of the session online.

"The weather today was ideal for our first trial out on the water," said Luna Rossa skipper Max Sirena. "From a technical standpoint, it allowed us to test safety measures, loads and manoeuvres.

"However, the really significant aspect was psychological - it was important for the crew to resume sailing on the AC72 and to get back into its normal training mode to prepare for the upcoming races.

"In the next few days, we will continue with our training and development programme as scheduled."