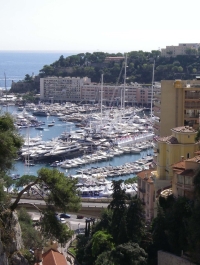 Around the Mediterranean, countries are battered by economic and political storms, from civil war in Syria and financial meltdown in Cyprus to the relentless grind of austerity in Greece, Italy and Spain.

But out on the water, it’s another story. There, yachts like Eclipse, the plaything of the Russian billionaire Roman Abramovich, are being chartered this season at weekly rates running into the millions of dollars, according to people in the charter market.

Eclipse may well be the most expensive superyacht on the market, plying the Mediterranean this summer at a weekly rate of €2 million, or $2.6 million, according to a person in the industry who asked not to be identified because he was not authorized to give the information. Superyachts Monaco, the charter agent, declined to comment.

At 162.5 meters, or 533 feet, Eclipse is certainly the biggest superyacht in the world.

But not for long. Azzam, a 180-meter boat, is now receiving final touches at the Lürssen yard in Bremen, Germany.

As the world’s superrich get richer, their superyachts get larger — and so does the number of people, or companies, willing to pay for a taste of extravagance. The yacht rental market has bounced back strongly since the economic crash in 2008 and 2009, helped by the recovery in the U.S. stock market and soaring wealth in much of the rest of the world — at least outside Europe.

Burgess, another yachting company, said its clients who chartered in the Mediterranean were mostly American and Russian.

The Web site of Superyachts Monaco offers a choice of three languages: Arabic, English or Russian.

Chartering clients who pay €100,000 to €1 million a week — often to anchor off a Greek island or to sit dockside in St. Tropez — seem to be impervious to the economic crisis.

“Let’s face it, at the level of wealth that we deal with for this product, the majority of people have not been adversely affected by the economy,” said Alev Karagulle, director of marketing and communications at Burgess.

Burgess had its best summer season last year, and Cape4 said it took in solid bookings in the first quarter for this summer, doing its bit to support the Greek economy.

If anything, there is more demand for chartering boats at the top end of the superyacht scale than 15 or 20 years ago: “The dynamic of wealth has changed,” Ms. Karagulle said.

Among the changes, locals who charter yachts are now a rarity. Mr. Chryssicopoulos said only 5 percent of Cape4’s clients were Greek, and most of those were vacation visitors living abroad.

Last year, the tourism sector, which includes the yacht charter business, contributed 16 percent of Greece’s gross domestic product, racking up 16 million international arrivals and €10 billion in revenue, according to the Association of Greek Tourism Enterprises. For 2013 the revenue target is €11 billion. Xenophon Petropoulos, communications and public relations manager of the association, said he was confident the industry would reach and even exceed that target.

In 2008 and 2009, when the industry suffered, it was not for a lack of wealthy clients; it was more a question of protective coloring.

“The economy was flat-lining, and going superyachting as a pastime was not something that a lot of people felt comfortable exhibiting,” Ms. Karagulle said. “It just didn’t feel right.”

That discretion has since given way to the urge to flaunt...