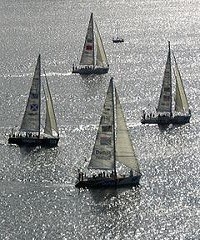 British boat Henri Lloyd has claimed first place in the tightly-fought Sydney leg of the Clipper Round the World Yacht Race.

After battling more than 3200 kilometres from Albany, Western Australia the 70-footer narrowly beat OneDLL and Chinese boat Qingdao into the Heads early on Friday morning, before crossing the finish line at 3.15am.

“This win has been a long time coming; we've been the bridesmaid for the last couple of races so it's nice to do one better and win race 5 into Sydney,” he said.

The remainder of the 12-strong fleet will arrive into the Cruising Yacht Club of Australia over the next two days.

The boats are then taking part in the Rolex Sydney Hobart yacht race that begins in December 26.

Clipper Ventures was founded by English sailor Sir Robin Knox-Johnston, who became the first man to sail solo, non-stop around the world in 1968. Sir Robin will also race in the Sydney Hobart.

The Clipper boats take on amateur crew from around the world, including 67 Australians. The 2013-14 edition of the race takes 11 months to visit six continents and will finish back where it started in London in July next year.
Read more: http://www.smh.com.au/sport/sailing/henri-lloyd-wins-sydney-leg-of-clipper-round-the-world-yacht-race-20131213-2zb7c.html#ixzz2nLGE7D4d