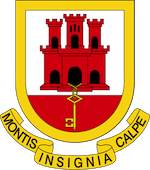 Spanish boats illegally entered Gibraltar's waters after a stand-off with the Royal Navy on Sunday.

In an escalation of the bitter diplomatic dispute over fishing rights, British military and police boats had to push back a flotilla of around 40 Spanish vessels.

The fishermen, some shouting "Gibraltar is Spanish", were protesting against a concrete reef built by the Rock's government to protect its fishing stock.

They argue the reef restricts their rights to fish, but Fabian Picardo, Gibraltar's chief minister, said "hell will freeze over" before the barrier is removed.

In the tit-for-tat row, Spain introduced extra checks causing five-hour queues for drivers trying to cross the border and has threatened to bring in a £40 charge.

The tensions led David Cameron to complain to the Spanish prime minister Mariano Rajoy and ask for the European Commission to intervene on Friday.

As the political dispute continues to rage, the Spanish fishermen took matters into their own hands on Sunday by sailing into Gibraltar's waters.

Cathal Yeats, chief inspector of the Royal Gibraltar Police, said the flotilla crossed into Gibraltarian waters before being "corralled" out again.

"At around 9am about 38 Spanish fishing boats and seven or eight pleasure craft converged in the area of the western anchorage," he said. "We had our own police cordon along with Royal Navy and other assets and we corralled them in the area of the south mole.

"They tried to breach the cordon several times but they were not successful."

According to Press Association, Spanish Guardia Civil boats also warned the vessels not to sail too close to the British territory's reef.

Cameron has called Spain's reaction to the reef "politically motivated and disproportionate" and suggested the extra border checks are contrary to the EU right of free movement.

Rajoy has said he would prefer to settle the dispute in a friendly manner but at the same time threatened to use all measures available to defend his country's interests.

The row could intensify further on Monday as HMS Westminster, a British warship, and two auxiliary vessels are due to dock in Gibraltar, with crowds of flag-waving residents set to welcome them into port.

British officials have stressed that this is part of a "routine" journey from England through the Mediterranean to the Gulf.Picardo, the Gibraltan chief minister, who has received death threats over the conflict, thanked the British authorities for their "cool, professional and calm" help in fending off the Spanish boats.

Julie Girling, the British MEP for the South West and Gibraltar, also arrived on the Rock on Sunday to meet ministers but official sources said no peace talks between Britain and Spain have yet been scheduled to take place.

"Their government should respect the views of the people of Gibraltar," he added.