Free Voice Calls On iPhone and iPad With Facebook Messenger 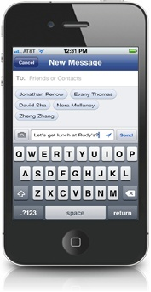 Owners of Apple iOS devices can now make free voice calls to other Facebook users in the UK thanks to the release of a new version of the Facebook Messenger application. The latest version adds support for free voice-calling over WiFi and mobile data on the iPhone, iPad and iPod Touch.

We first reported on Facebook voice-calling back in January when it was trialled in Canada. The trials have obviously been successful with the feature now being rolled out across the world. Facebook Messenger also enables you to have text conversations with your friends (including group chats).

Facebook are already thought to be working on including free video calling in their Messenger application , which would be great. These functions are already available in Skype , but so many more of our friends are on Facebook.

VOIP (Voice-Over-Internet-Protocol) calling poses a huge problem to mobile operators because it reduces a users reliance on their call and text allowance. With unlimited data being offered on all new smartphones it looks set to become more and more popular over the next year.

We're sure the mobile operators have something up their sleeve, but right now it's a good time to be a smartphone owner. Operators are offering unlimited data, 4G is rolling out and free WiFi is sprouting up all over the place.