Yachting News » Of Interest » Fond Farewell to The Flying Dutchman
« BACK

Fond Farewell to The Flying Dutchman 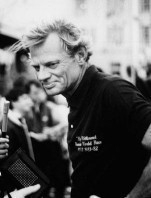 On behalf of the Volvo Ocean Race we are sorry to report the sad news that Conny van Rietschoten has passed away.

The only skipper to have won the race twice, Conny van Rietschoten, died on Tuesday aged 87 after suffering a stroke. The Volvo Ocean Race family salutes an iconic character and one whose daring stories will long be remembered.

Born on March 23 in 1926, Van Rietschoten grew up in The Netherlands. A successful businessman, he was looking for a new challenge and found it in the second edition of the Whitbread.

He skippered Flyer I in 1977-78, holding off main rival Kings Legend to win the race on corrected time. He returned in 1981-82 and again won on overall time with Flyer II after a thrilling neck-and-neck battle with Kiwi adversaries Ceramco New Zealand.

Van Rietschoten is still the only skipper to win two editions of the race, a record he holds to this day, and the first to win on both elapsed and corrected time. He is also the only Dutch skipper to have won the race. “The Flyer crew are saddened to hear of the passing of our great friend Conny,” commented Grant Dalton, one of his crew on Flyer II and now manager of Team New Zealand.

“Nearly all of us can track our careers to Conny. We were all young, restless, most of us totally unproven and yet Conny took a chance on us. He allowed us to be ourselves, sometimes guiding us, sometimes coming down hard on us. He taught us how it was going to be done in the future and he introduced a professional business approach to offshore sailing. He was indeed a pioneer.

“In losing him today we have lost a person that, to a man, we looked up to with respect and thanks,” added Dalton, a winner of the Whitbread himself. “His picture hangs alongside Peter Blake on my wall, it always will. Goodbye Conny, gone but never forgotten, thank you for taking a chance.”

It’s not only his victories that made the Flying Dutchman a true legend of the race. His meticulous style helped take the event – and the sport of sailing – to a new era of professionalism. For the second campaign on Flyer II, the visionary van Rietschoten recruited sailors from around the world, taking onboard people such as up-and-coming Kiwi stars Dalton, Joey Allen and Erle Williams.

“Winning two Whitbreads in a row was the result of Conny’s planning, decision making and leadership skills which were outstanding,” said Williams. “Conny was a wonderful man to sail for. He trusted and encouraged his crew to race Flyer hard and at the same time knew when to back us off.”

With Flyer II, the then 55-year-old Van Rietschoten proved himself a tough competitor - in fact, very tough: despite suffering a heart attack deep in the Southern Ocean, the skipper swore his crew to secrecy and would not even allow the crew's doctor to contact a cardiologist on rival yacht Ceramco for advice.

“The New Zealanders were breathing down our necks,” he said. “If they had known I had a health problem, they would have pushed their boat even harder!”

Thirty years on, a great man has passed but leaves behind a long-lasting legacy. Since the 1980s, the Conny van Rietschoten Trophy has been awarded to the best Dutch competition sailor. Volvo Ocean Race competitor and America’s Cup winner Simeon Tienpont was the 2013 recipient.

“The Netherlands are very fond of the race and that’s all because of Van Rietschoten,” said Tienpont. “He brought the event to an entirely new level. His campaigns have had an effect on how we are growing as a professional sport right now.”