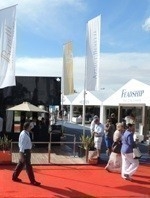 With the Fort Lauderdale International Boat Show underway, organizers and others involved in the marine extravaganza are looking beyond the horizon.

Among their concerns: The event's relevance in the super-yacht sector and efforts to attract a younger and broader demographic of buyers as existing boat owners age. Unlike shows that specialize in a specific type or size of boat, the Fort Lauderdale event offers a wide range of vessels and accessories for every stage of the boating lifestyle, from beginners to accomplished yachtsmen. But keeping up with the expectations of show-goers and exhibitors catering to each boating level isn't always easy, a show official said Friday.

"The challenge is to make the show really great for each of the types of boats there are," said Efrem "Skip" Zimbalist III, chief executive of Show Management, the event's producer and manager.

Zimbalist spoke during a panel discussion aboard the 281-foot mega-yacht Cakewalk docked at the Sails Marina.

One example of how organizers have worked to remain relevant to boating enthusiasts is by creating villages with unique personalities within the show, Zimbalist said.

As the show evolved in the late 1990s, the first village concept was created for the super-yacht exhibit area at the Bahia Mar Yachting Center in response to builders' requests to have their booths next to boat displays, rather than inside a nearby tent. For Jonathan Beckett, president and CEO of luxury yacht broker Burgess, the super-yacht village area works well for companies like his whose clients often have only a few hours to spend at the show and want to maximize their time.

"It's a very, very big show, but it's a good show if you want to come look at super-yachts and look at tenders as well," Beckett said, so having the boats and booths close together helps.

Show organizers have also sought to keep the show fresh by adding entertainment options such as "pop-up" musicians and a fireworks display, enhanced food and beverage offerings and improved signage to help visitors navigate the show's six sites. Other key priorities include marketing to a more global audience.

According to a survey by Show Management's parent company Active Interest Media Marine Group, there are a number of younger affluent American boaters, mostly single and without kids — dubbed "social animals" — that have been evangelists for boating, influencing friends to try it. That demographic will be key to growing the industry in the future, show organizers say.

Given the high expectations surrounding this year's show, panelists also discussed what makes a good show.

"We're looking for the needle in a haystack. We need one man on one day on one yacht," said Beckett, noting that the Monaco Yacht Show in September was a good event for Burgess. "We had eight offers on different yachts at the Monaco show and three of those have gone to contract."

Others panelists, like Lon McCloskey, president of the Florida Yacht Brokers Association, say asides from selling boats at the show, another measure of success often lies in the number of qualified leads a broker ends up with.

"If you can come back from a show with a handbook full of new prospects that are serious prospects … that you can work on within the next 30 days to six months … that's a marked success."

For more information on this year's event, visit the official Show Management website