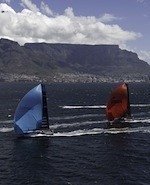 Cape Town will take the place of Recife on the route for the Volvo Ocean Race 2014-15 in a direct change announced on Thursday at the city’s V & A Waterfront.

The decision to go to the classic sailing city of Cape Town in South Africa for the 10th time in 12 editions of the Whitbread/Volvo Ocean Race means the teams will now make a single stop in Brazil in 2014-15 rather than two.

Recife’s place on the route had been connected with a team from the Brazilian state of Pernambuco. Plans for that team – conditional for the decision to include Recife in the route as a second Brazilian port – have not progressed as expected.

“It is of course disappointing not to go to Recife in this edition but Brazil is very well represented in this race including a stop in Itajaí,” said Volvo Ocean Race CEO Knut Frostad. Recife has the potential to be a good stopover in future and both parties will look at possibilities for forthcoming editions.

The Volvo Ocean Race is celebrating its 40th birthday this year and Cape Town has played a prominent role in its success. The South African city first appeared on the Volvo Ocean Race route in 1973-74, in the inaugural edition of what was then the Whitbread. Its return means the race will once again stop at all five continents in 2014-15.

“Cape Town is an iconic city and the sight of Table Mountain on the horizon as you approach the port at the end of Leg 1 is something every ocean racer looks forward to,” said Frostad.

Councillor Grant Pascoe, the City’s Mayoral Committee Member for Tourism, Events & Marketing, said he was delighted the City of Cape Town and the V & A Waterfront would host the event once more.

“Not only does this race offer worldwide marketing exposure for Cape Town and raise the City and V & A Waterfront’s profile as a top leisure and events destination, it also provides a valuable boost for the many local industries through visitor and organiser spend,” he said. Bruce Parker-Forsyth, CEO of WorldSport which is the Host Port Delivery Partner for Cape Town, added: “In 2014 a new partnership between the City, V & A Waterfront and WorldSport has been formed in a true public and private sector partnership that will result in an ocean legacy programme being set up that will begin before and continue after the Volvo Ocean Race stopover and will create a new generation of South African ocean sailing legends.”

In addition to the two teams already confirmed – Team SCA and Abu Dhabi Ocean Racing – the race organisers are confident of welcoming more participants to the start line in October 2014.

Itajaí, in the southern Brazilian state of Santa Catarina, remains in position on an otherwise unchanged route at the end of the main Southern Ocean leg from Auckland in New Zealand.

The introduction of the one-design Volvo Ocean 65 boat to contest the next two editions means teams can start their preparations much later and still be competitive.

“The first boats are almost ready to be delivered from the boatyard in Green Marine and last week we began construction on No. 7,” said Frostad.

“We are currently working with a large number of projects who are in a very advanced stage in terms of getting their teams and backing together.”

The race route will now see the teams leave Alicante in Spain in October 2014 and head south some 6,500 nautical miles to Cape Town in South Africa. From there, they will race to Abu Dhabi before going to Sanya in China and Auckland in New Zealand.

The teams will then head round Cape Horn before stopping at Itajaí in Brazil and going on to Newport, Rhode Island on the east coast of the United States. They then cross the Atlantic to Lisbon in Portugal before going on to Lorient in France and then to the finish in Gothenburg, Sweden.

The new total distance will be 39,379 nautical miles.