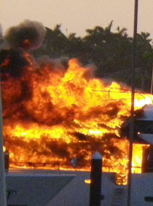 Sixteen people have been rescued after abandoning a burning luxury yacht which later exploded and sank off Queensland.

Eight passengers and eight crew were aboard the 41-metre superyacht Seafaris when it caught fire before sinking off the Daintree coast about 6am on Thursday.

All 16 shocked survivors arrived at Cairns marina about noon.

They were exhausted and barefoot, and some wore only shorts after their rapid escape.

An older passenger was asleep when the alarm was raised.

"We just got organised and got in the raft in the water."

A middle-aged man, who didn't want to be named, said: "We're all safe. That's all that matters."

Everyone aboard made it to the lifeboat and not long after there was an explosion and the Seafaris sank.

They were picked up by a passing container ship. Two people were treated for minor injuries by paramedics who were winched aboard.

Glen Alitt, a harbour pilot who brought the survivors into Cairns, said they had not been very talkative. "I think they're all in a bit of shock."

The Seafaris was used for luxury charters for high-end tourists along the Queensland coast. McCloy Group, which owns the vessel, has refused to comment.

According to the Brisbane Times, the Australian Maritime Safety Authority’s Rescue Coordination Centre Australia has sent towage vessel Pacific Responder to the scene, where it will work with Maritime Safety Queensland (MSQ) and Great Barrier Reef Marine Park Agency to assess the situation and respond to any marine pollution issues.