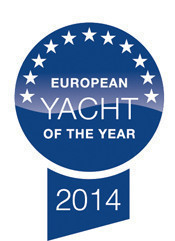 The jury comprises the test directors and editors-in-chief of Europe’s leading yachting magazines. The hotly contested prizes are traditionally awarded at the FLAGSHIP NIGHT, the traditional meeting of the industry hosted by Delius Klasing Verlag and boot Düsseldorf on the first weekend of the show. Publisher Konrad Delius and boot Düsseldorf project manager Goetz-Ulf Jungmichel welcomed more than 400 guests from the international maritime scene to the awards ceremony this year.

Only four yachts awarded
Almost 100 new yachts reach the market every year. However, only four shipyards could look forward to winning the hotly contested “European Yacht of the Year 2014” title. Because there were not enough new products to choose from among the catamarans and trimarans, there was no award in the multi-hull category. This year it was particularly difficult to produce a short list of 20 nominated yachts because the market had never seen such a richness of good, well-balanced, attractive and special yachts as in 2013. The jury from the eleven leading sailing magazines held two practical test sessions in Southampton, England and Porto Venere, south of La Spezia, Italy, involving intensive trials and assessments. The Family Cruiser category was won by market leaders Beneteau, demonstrating courage and a taste for innovation. The Beneteau Oceanus 38 is an unusual design through-and-through, a yacht that can be converted from a family cruiser to a day sailboat for two. As well as its superior sailing characteristics, the variable Beneteau Oceanus 38 also impressed the jury with its stylishness and light below deck.

This year’s award in the Performance Cruiser category went to the Dehler 38 in an immaculate debut. While many competitors in this segment concentrated on performance, the Dehler 38 successfully steers a middle course as a sports model that is also good for touring. The specific virtues that characterise Dehler vessels – a high level of practicality and quality, as well as good balance, positive cruising performance and an interesting pricing policy – come to the fore in this model.

In the Special Yachts category, a newcomer to the tests for Europe’s yacht of the year consistently came out on top, Saphire 27 from Switzerland is a modern sports boat that is perfect as a sprightly day sailing vessel or for one-design regattas whatever the wind conditions. The Saphire 27 is also suitable for touring.

The Georg Nissen-designed Contest 42 CS won out in the highly competitive Luxury Cruiser category. The almost 13 metre yacht features impressively sleek lines and a clear design. It brings the ambience of 60 foot modern luxury cruisers to a size that can also be successfully handled by smaller crews. Its excellent sailing performance is unparalleled.