Yachting News » Of Interest » Ellison Calls for Racing Series
« BACK 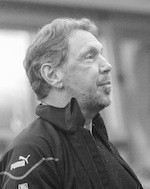 America’s Cup organizers plan to start a racing league with 10 or 20 franchises if Oracle Team USA can rally to defend its title this year in sailing’s most prestigious competition.

“Our plan is to start a world series of racing, taking it to different venues and pick challengers from that group by 2017,” Harvey Schiller, vice chairman of the America’s Cup advisory board, said yesterday at the Bloomberg Sports Business Summit hosted by Bloomberg Link in New York.

Oracle used its option to postpone yesterday’s second race after it lost the first one to Emirates Team New Zealand by more than a minute.

New Zealand has won four of the first five races in the series and needs nine victories to win the America’s Cup, while Oracle still needs 10 after being penalized for improper modifications to its smaller yacht fleet last year. The competition, which resumes tomorrow, will be hosted next year by the winner.

“We need to go back and regroup. We feel they have an edge on us at the moment, especially upwind,” said Oracle skipper Jimmy Spithill. “We need to do a bit of work here and we’re going to play the card, strategically, and hopefully improve in time for the next race.”

Schiller said the America’s Cup, in a bid to reduce expenses and encourage more countries to compete, probably will return to 45-foot (14 meter) boats from the 72-foot catamarans now being raced. He noted that only three teams challenged Oracle, largely because the cost to build and run a team is upwards of $100 million.

Schiller said a racing league could be just the thing to reinvigorate the sport.

“A lot of people are in sports for ROE: return on ego,” Schiller said. “Everyone would like this sport to become more popular. Baseball is in the paper every single day. We’ll try and be that, too. We need fan development like any new sport. It’s an old sport that we let get away.”