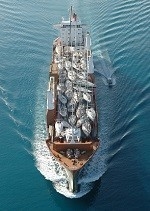 Super Servant 4, one of the ships in DYT Yacht Transport’s fleet of yacht transporters, diverted six miles from its course to Saint Thomas to assist racing sailors Thierry Chabagny and Erwan Tabarly aboard their dismasted yacht Gedimat, which had radioed the ship for help on Tuesday, April 23.

The 32-foot Figaro Beneteau II is competing in the Transat AG2R La Mondiale, a 3890-mile double-handed race that began on April 6 from France and is due to finish at the French Caribbean island of Saint Barthelemy.

Gedimat had dismasted during a gale and its diesel had run dry as the vessel tried to reach the island of Madeira, a Portuguese archipelago 250 miles north of the Canary Islands in the North Atlantic. With no reported injuries or problems with health aboard Gedimat, Super Servant 4 – which was 180 miles west of Madeira at the time of the call – proceeded to divert and deliver two drums with 20 liters of diesel in each, to Gedimat. The two drums were thrown into the water, connected to a third empty drum with a light. The crew was successful in bringing the drums aboard with no additional assistance in the 20-knot breezes and two-meter swells. Gedimat was leading the fleet at the time of the rig failure and had approximately 1900 miles to go to reach Saint Barthelemy.  In an email, the co-skippers wrote:

"The Super Servant diverted and threw two jerry cans of 20 liters. This should be enough for us to reach Madeira with ETA Friday (April 25) afternoon. The conditions are not ideal for drive motor (sea headwind ), but progress is still a small 5 knots. The idea is to refuel in Madeira and to proceed to Lagos (Portugal) in the wake where a carrier is waiting for us. Thank you. Until soon. Chab & Tab . " Late last year, DYT Yacht Transport partnered with another leading yacht transport company, Sevenstar Yacht Transport, which has been good news for yacht owners who, by choice or necessity, depend on the shipping of their prized possessions to various ports around the world.  The two companies, while maintaining their separate identities, are fully equipped to advise on the best options for either float-on/float-off (FLO/FLO) or lift-on/lift-off (LO/LO) services offered by a fleet of over 120 ships that are wholly owned and operated by parent company the Spliethoff Group, one of the largest ship owners in The Netherlands, which plays a major role in the global transport market.