Yachting News » Of Interest » Diageo Uses Yachts for Marketing
« BACK 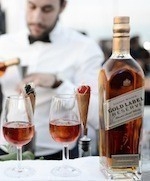 The company chartered a luxury yacht, naming it the John Walker & Sons Voyager, which set sail from Shanghai on Sept. 20 and traveled through the Asia Pacific region over six months. The boat has now docked at European cities including Athens and London, promoting the company’s high-end Johnnie Walker Scotch whisky brands, including Odyssey, a newly created triple malt whisky retailing for about 750 pounds ($1,140) a bottle. Even as European economic growth stagnates, consumers in the region still have relatively high levels of average income and want to treat themselves, Kennedy said at the company’s head office in London two days ago.

The euro-area economy, which has contracted for six quarters, probably stagnated in the three months through June, according to a Bloomberg survey of economists.

Diageo has considered opening a Johnnie Walker sales branch in Europe, echoing the bespoke houses the company has in Shanghai and Beijing, where the average bottle of whisky costs 1,500 pounds, Kennedy said.

Diageo, which competes with companies including Pernod Picard (RI) SA, is seeking to expand in Asia and Latin America where faster economic growth is helping spur alcohol consumption.

Organic sales in Asia Pacific rose 3 percent in the year through June, a slower pace than the 4 percent reported in the first nine months, the company said two days ago.

In Europe, the distiller sees potential to grow sales of brands including Ciroc vodka and Don Julio tequila. Reserve brand sales in the region are dominated by single malt whiskies, Kennedy said, providing an opportunity to increase the proportion of sales from other spirits.

“Europe is the global luxury capital,” Kennedy said. “We’re talking about affordable luxuries, not driving a Porsche through the centre of town.”