Yachting News » Of Interest » Developers Slowly Return to Caribbean
« BACK 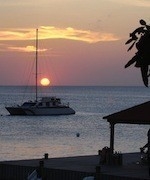 A few brave developers are venturing back into the Caribbean luxury-hotel and resort market, one of the sectors hit hardest during the global real-estate downturn. But only developers with ample financing in the busiest markets are getting off the ground.

The Caribbean overall remains littered with half-built resorts and villas that stalled in 2008 and 2009 after banks and investors pulled financing. Among those that still languish are a Four Seasons in Barbados and a Westin property in St. Lucia.

But a few well-financed developers are breaking ground again, including Dart Realty (Cayman) Ltd., which plans to start construction in September on a 263-room boutique hotel in Grand Cayman in the Cayman Islands that will be operated by Kimpton Hotel & Restaurant Group LLC. The project, near Dart's Camana Bay development on Grand Cayman's Seven Mile Beach, also will include 56 condominiums and beach bungalows for sale.

The company will finance the $170 million project with its own capital rather than seeking construction loans from banks, said Jackie Doak, Dart's chief operating officer. The hotel, which is being built on the site of a former Courtyard by Marriott hotel that Dart razed earlier this year, will be the first that San Francisco-based Kimpton will manage in the Caribbean.

Ms. Doak said Dart is moving ahead with the project's residences that are for sale because most of its prospective buyers are from the northeastern U.S., where homeowners weren't as badly burned by the recession and where she says the appetite for vacation homes is rising again. Prices in the Camana Bay area now average $900 to $1,100 a square foot for luxury residences that can sell for $1.7 million to $5 million, according to Cayman Islands Sotheby's International Realty. Dart hasn't set prices for its new hotel residences. "We anticipate that, once we take this product to market, we'll be quickly absorbed," Ms. Doak said.

Caribbean Property Group, a New York-based company that develops commercial and residential property in the Caribbean, was able to complete construction last December on its 115-room Ritz Carlton Reserve resort in Puerto Rico's Dorado Beach. The company says it benefited from its location in a populous U.S. commonwealth rather than a remote island. Official backing helped: The developer received $230 million in loans guaranteed by the Puerto Rican government.

The Ritz at Dorado Beach includes 14 completed residences and another 14 under construction. They have sold at prices ranging from $3.2 million to $8 million, Principal Kenneth Blatt said. Most buyers are paying in cash, and many are comforted by the project's U.S. financing, which entails the developer putting buyers' deposits into escrow. That is in contrast to spending the money on construction, as is common practice in the Caribbean. "Clearly, we have an advantage being in Puerto Rico, with its connection to the U.S.," Mr. Blatt said.

Still, any upscale or luxury resort under construction in the Caribbean is the exception to the rule these days. The Caribbean always has been an expensive place to build and operate a resort, given that costs for materials and importing are high, labor sometimes is scarce, the weather can be severe, and tourists can be finicky. Adding to this, the global economic downturn scared away many banks and villa buyers from investing in the already-risky market.

Expansion of the Caribbean's hotel stock remains tepid. If all 15 Caribbean hotels (1,502 rooms) slated to open this year do so, that will amount to a growth rate of less than 0.1%, according to Lodging Econometrics. In comparison, Caribbean hotels opened in 2008 resulted in a 3.4% growth rate for the region. In the U.S., developers are expected to open 501 hotels (55,308 rooms) this year, notching a 1.1% growth rate, according to Lodging Econometrics.

A primary reason for the Caribbean construction lull, aside from the inherent risks, is that it is far cheaper to buy and redevelop an existing resort on the islands than to build a new one. Chicago-based AJ Capital Partners bought the shuttered, 55-room Malliouhana resort in Anguilla in February and intends to renovate the luxury boutique resort and reopen it early next year.

"Ground-up development will make sense in Mexico and the Dominican Republic, to some extent," said Rick Newton, founding partner of Resort Capital Partners, a Caribbean lodging consultant in Charlotte, N.C. "But, on the luxury side, you're much better off buying an existing asset and recasting it in some way, shape or form."