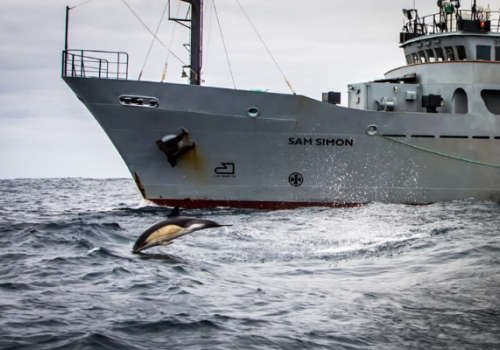 Purchased from the Japanese government, the Sam Simon was secretly outfitted in Australia before being used to confront the illegal whaling fleet in Antarctica on Operation Zero Tolerance in 2012. It is a ship that is very close to its captain Alistair Allan’s heart, who was a crewmember on the Sam for that campaign and has spent many of the ensuing years on board.

Since 2016, the Sam has served a different purpose; continuously sailing around the globe participating in a myriad of campaigns, from crossing the Atlantic to Mexico to protect the critically endangered vaquita to riding out the freezing winter storms on the Bay of Biscay and exposing the mass killing of dolphins as a result of bycatch. Its crew has removed Fish Aggregating Devices (FADs) and illegal driftnets in the Mediterranean and hunted down poachers on the hot and humid patrols in Liberia and Gambia to combat the scourge of illegal fishing.

What isn’t seen is the toll that all that time at sea takes on the ship.

With most of the crew’s time spent at sea patrolling the world’s oceans to defend marine life, only the high priority jobs get done, the ones that keep the vessel safe and on-campaign. The smaller ones get pushed back. Unfortunately, the longer they are pushed back, the bigger these jobs become.

So now, as crew and captain face lockdown and strict self-quarantine for an unknown length of time, this is where they are beginning to turn their attention. The time has come for them to pay back their beautiful ship for all those years of hard work and take the time for some serious TLC. From rust to chip and repair from the very top of the ship to the hull, paint to sand back and restore, machinery to service and clean, pipes to weld and replace and new equipment to install, there is plenty to be done.

This is a welcome rest for the ship, and one that will see her in top condition for what lies ahead, when the time comes.

Watch this video to discover the quarantine life on board Sam Simon.