Yachting News » Of Interest » Confessions of a Stewardess - 2nd edition!
« BACK

Confessions of a Stewardess - 2nd edition! 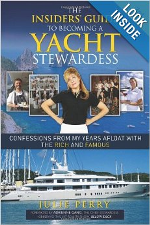 Julie Perry, author of  The Insider’s Guide to Becoming a Yacht Stewardess, knows all too well about the yacht-owning super rich. After three years as a stewardess, visiting more than 40 ports in 18 countries, she's had to clean rooms, iron sheets and wait on the cranky children of the yacht owners. Yet, she also got paid to rub elbows with billionaires and travel around the world for free.

While she doesn't name names, Perry says that serving the super rich has given her a treasure trove of unique experiences-- and it hasn’t been all smooth sailing.

"Of course I've met plenty of trophy wives and horrible kids who've grown up with a silver spoon in their mouths, but I've also met some of the nicest people. They didn’t get to where they are by not having any good character traits at all," Perry told FoxNews.com.

Perry, who’s now a social media consultant in Indiana, decided to share her stories in a book filled with helpful career advice and plenty of entertaining confessionals.

Perry says living the life of privilege can sometimes create outlandish circumstances.  She tells of a story of an American  family that chartered a yacht to the Mediterranean over 20 days.

"They had a 16 year-old boy and 5 year-old child. The mother insisted we provide them with these special fleece blankets to sleep with that cost about $10,000 each," she said. She said the 5-year old would watch the TV show "South Park" all day long.  The 16 year-old boy was still having accidents in his bed at night, which she had to clean up.

Perry says many times the owners don’t speak to the crew, and usually had someone else ordering them to clean a gold sink, deliver food at fancy dinner parties, or pick up after people. She said yacht stewardesses are expected to get guests whatever they want --however impossible that might be.

On one trip to the Mediterranean, a woman wanted U.S. newspapers on the breakfast table when the owner of the yacht woke up. "We were going to Croatia, Greece, Turkey, places where you cannot expect to have American publications that early in the morning," she said. Perry found out that the papers wouldn't be available until later in the day, so every afternoon she had to go ashore to get the paper for the guest. "It was like she knew there was no way we could deliver what she asked for, but she still asked for them to see us sweat.”

Perry said sometimes she had to negotiate the fickle whims of guests. She explained how a birthday party was suddenly cancelled simply because a quest was in a bad mood. “She walked in, looked at all the decorations and special food platters we had out and said I don’t want a party anymore, take it all down,” Perry said.

The payoff for dealing grumpy guests and grunt work is the money. A senior level stewardess working on a yacht over 180 feet can make between $85,000-$96,000 a year. But the real money can come from the tips, which are typically about 10 percent of the charter rate.

"One of the best tips I ever received was from a 20 day charter that cost the owner about $25,000 a day. He was the nicest man, but a little recluse. He would eat breakfast alone every morning and gulp down two pots of coffee by noon, then by 2:30 p.m. he’d switch to Scotch. He tipped 22 percent. Divided amongst a crew of 10 we each ended up making $11,000. And he only brought along four guests on a yacht that slept 12," Perry said.

Other memorable tips included a beautiful medallion engraved with a picture of a yacht, and a fully paid trip to New Orleans. One of Perry's co-workers even received a bunch of free shoes from actress Florence Henderson.

While being a yacht stewardess requires taking the good with the bad, for the most part Perry says she’s had a lot of fun and met wonderful people.

“There is always so much backlash against the ‘one percent’ and how they are these horrible individuals, but people are people,"  she said.