Yachting News » Of Interest » Caribbean Has Lost 80% of Reefs
« BACK

Caribbean Has Lost 80% of Reefs 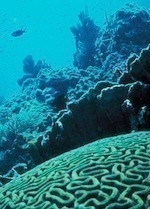 A major survey of the coral reefs of the Caribbean is expected to reveal the extent to which one of the world's biggest and most important reserves of coral has been degraded by climate change, pollution, overfishing and degradation.

The Catlin scientific survey will undertake the most comprehensive survey yet of the state of the region's reefs, starting in Belize and moving on to Mexico, Anguilla, Barbuda, St Lucia, Turks & Caicos, Florida and Bermuda.

The Catlin scientists said the state of the regions' reefs would act as an early warning of problems besetting all of the world's coral. As much as 80% of Caribbean coral is reckoned to have been lost in recent years, but the survey should give a more accurate picture of where the losses have had most effect and on the causes.

Loss of reefs is also a serious economic problem in the Caribbean, where large populations depend on fishing and tourism. Coral reefs provide a vital home for marine creatures, acting as a nursery for fish and a food resource for higher food chain predators such as sharks and whales.

Stephen Catlin, chief executive of the Catlin Group, said: "It is not only important that scientists have access to this valuable data, but companies such as ours must understand the impact that significant changes to our environment will have on local economies."

Globally, coral reefs are under threat. The future of the Great Barrier Reef in Australia is in doubt as mining and energy companies want to forge a shipping lane through it to form a more direct link with their export markets.

Warming seas owing to climate change can lead to coral being "bleached" – a state where the tiny polyps that build the reefs die off. The US government's National Oceanic and Atmospheric Administration predicts increasing frequency and severity of mass bleaching events as global warming takes effect.

Richard Vevers, director of the project, told the Guardian that one important role of the new survey would be to describe a new "baseline" to establish how far such problems have taken their toll to date, which will enable future scientists to judge how degradation – or conservation – progresses.

He said the team of scientists would also probe the underlying reasons for such degradation, with a view to informing conservation efforts.

The team will use satellite data as well as direct observations to assess the reefs. As part of the survey, they will develop software that marine scientists can apply to other reefs around the world. A new camera has been constructed to assist their efforts.

Vevers said: "The Caribbean was chosen to launch the global mission because it is at the frontline of risk. Over the last 50 years 80% of the corals have been lost due mainly coastal development and pollution. They now are also threatened by invasive species, global warming and the early effects of ocean acidification — it's the perfect storm."

Photo Jerry Reid of the U.S. Fish and Wildlife Service, via Wikimedia Commons