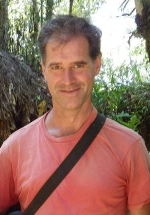 He left Calgary when the Flames were Stanley Cup champions, acid-wash jeans were the rage and an obscure little band named Nirvana had just signed to Sub Pop Records.

That was 23 years ago, and after a pint of Guinness in Ireland to celebrate landing his final passport stamp this week, Mike Spencer Bown is at last ready to return home, having extensively travelled every single country and region on earth.

That word, “extensive,” is key: Others have visited just as many countries, but Bown made a point of sticking around and immersing himself each culture.

For that reason, the Calgarian can now lay claim to the title of most extensively travelled person in human history.

“Some of the least travelled people I’ve ever met have been to 100 countries, or even as high as 170 countries — what they do is fly between major cities and especially capital cities, stop off in the airport or take a hotel for the night, and then say that they’ve ‘done’ such and such country,” said Bown, speaking with the Sun via Facebook.

“To my view, such people are passengers, not travellers.”

Bown’s tale of extreme travel has already made national news in Ireland, and European media outlets like The Guardian are planning features on his staggering two-decade achievement, accomplished with little more than courage and a backpack.

It’s not the 44-year-old’s first time in the headlines: Two years ago, BBC World Service and Time Magazine were among the outlets buzzing over the unexpected appearance of a tourist in war-torn Mogadishu, Somalia — the first recreational visitor in more than two decades.

Officials thought he was crazed at first, but soon learned the Canadian was serious about visiting a place listed as the most dangerous region on earth — and not only visit, Bown wanted to see beaches once renowned as among the world’s most beautiful.

And so he did, adding the forbidden nation to his roster of scary journeys, which also included taking local transport across Taliban controlled Afghanistan and hitchhiking through Iraq during the U.S. invasion, including a visit to Saddam Hussein’s hometown.

“The Iraqis were generous people, with a fascinating ancient culture,” said Bown, who ran an export business in Indonesia before selling it to fund his adventure.

One of his fondest trips started as another dangerous adventure, skirting U.N. armored units in the Democratic Republic of Congo, and then slipping past genocidal Hutu rebels to ride 1,000 km on the back of a motorcycle into the rain forest.

There, he lived with a Bambuti pygmy tribe, hunting antelope with spears and nets and sleeping in leaf huts.

“People are basically good and worth knowing whatever the race or culture they hail from,” Bown said, of the differences between the cultures — and once past some very peculiar customs, he adds, people are remarkably similar across the planet.

And he certainly knows. For every insect-ridden rain forest and adrenaline rush, Bown also visited the countries most Calgarians dream of when they think vacation, from Europe to Australia.

He also celebrated birthdays on every continent, including Antarctica.

His life of travel hasn’t been without it’s sacrifices, and not just comfortable beds and regular hot showers.

“The biggest disadvantage is the impossibility of any sort of normal family life. It is not possible to be married or to raise children, and only by the utmost effort can I maintain friends,” he said.

Ireland and Israel were Bown’s final countries, now numbering over 190 — Israel because to visit there can hinder your chances of later entering some Muslim nations, and Ireland because it was easy and a fun place to celebrate.

He’s not sure what’s next — promises have been made for a celebratory pint with friends and family back in Calgary — but there’s surely a book in the making.

After 23 years, there are endless stories to tell.

“I’ve had no ‘down time’ — every day of my adult life has been adventure, and for this I feel very grateful,” said Bown.

While You Were Working

2. Learned to drive a reindeer sleigh while drunk with the Yakuti tribe, Yakutsk, Russia

3. Hung out with witch doctors on the Dogon Escarpment, Mali

7. Dropped in on the villages of the Yezedi Devil Worshippers, Iraq

8. Paddled past sleeping tigers in the Sunderbans Mangrove Forest, Bangladesh

10. Drank Guinness in Ireland. He still is.