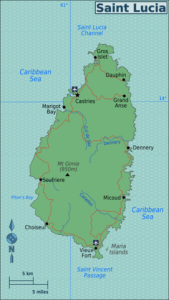 A British man has been murdered while trying to protect his wife from attackers on the Caribbean island of St Lucia.

Three people are in custody and a murder inquiry launched after the death of Roger Pratt, 62.

The couple were attacked while their boat was moored off the Vieux Fort coast where they had been staying as part of a round-the-world voyage, celebrating Margaret's 60th birthday.

They left Lowestoft in June, navigating the English coastline before heading to the Algarve and on to the Caribbean.

A St Lucian police spokesman confirmed Mr Pratt died trying to defend his wife from attackers, but said there was no evidence the man was shot.

He said: "Nobody has been arrested yet but there are some guys in custody. The investigators are very busy looking at what happened."

Mrs Pratt was taken to hospital after the attack and was later released.

St Lucian tourism minister Lorne Theophilus said: "It is with much regret that I and other industry partners have learnt of the unfortunate incident which has resulted in the loss of life of a visitor to our shores.

The attack happened at Vieux Fort

"At this time we extend our sincerest condolences to the family of British national Roger Pratt. To his wife, who also sustained injuries as a result of the attack off the Vieux Fort coast, we extend our deepest sympathies. Our prayers are with her for a speedy recovery.

"This is an active investigation and law enforcement is leading the charge in an attempt to bring the perpetrator or perpetrators to justice speedily.

"Law enforcement officials have briefed myself and other senior tourism officials on aspects of the case although I am not at liberty to share some of those details with you at this time."

Sean Tipton for the travel association ABTA told Sky News that the safety record of St Lucia, which is a popular destination for British holidaymakers, was "very, very good".

He said: "I know the St Lucia authorities will be doing everything in their power first of all to reassure people that the island is safe to visit, and also if needs be to increase security levels as well on the ground over there.

"It is important that people do bear in mind, that generally speaking it is a safe place to visit.

"There are occasionally problems as there are in any country, and it's important that you take the same sensible security precautions that you would anywhere, such as making sure your hotel room is locked at night, avoiding walking in isolated areas late at night.

"If you take those sensible precautions, the chances of you being caught up in an incident as terrible as this are very, very small."

The couple lived in the village of Moreton Morrell in Warwickshire before embarking on their adventure.

Neighbours told Sky News the pair had lived there for about 25 years and were "thoroughly decent".

"They appeared to be very content, a normal couple", one said.

The Royal Norfolk & Suffolk Yacht Club said in a statement: "The club was stunned and saddened this morning to hear of the tragic death of club member Roger Pratt aboard his yacht Magnetic Attraction moored at St Lucia in the Caribbean.

"The Commodore, Anthony Knights, flag officers and members send their sincere condolences to his widow, Margaret and all other members of the family."

Writing on her blog in the hours before the attack, Mrs Pratt told how bureaucracy thwarted their attempts to leave that part of the Caribbean.

She said: "On Thursday morning the plan was to clear out from Soufriere, then to travel south and use up the 72 hours before we had to be away.

"But bureaucracy intervened. HM Customs and Excise in Soufriere told us that exit had to happen within 24 hours of clearing out; and that anyway, we couldn't clear out of Soufriere that day because the Immigration Officer hadn't come to work(!!)

"So here we are in Vieux Fort, the most southerly port of clearance in St Lucia. It's very different. There's a port; an airport and no tourists - and so it's a regular town."

Writing on her LinkedIn profile before she left, Mrs Pratt said: "Off travelling! The plan is to be in the Caribbean for my 60th birthday in January 2014... all a bit of a leap into the unknown. Please stay in touch - I plan to be an assiduous correspondent!"