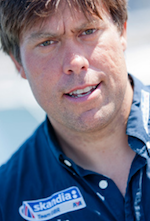 (CNN) -- Friends and fellow sailors mourned double Olympic medalist Andrew "Bart" Simpson after the shocking news that he had died in San Francisco Bay while training for the America's Cup.

The British sailor's death followed the capsizing Thursday of a 72-foot Artemis Racing boat during a training run.

After Simpson, 36, was pulled from the water, attempts were made to revive him on a boat aiding the rescue operation and on land, but they were unsuccessful.

The other 10 crew members were all accounted for, Sweden's Artemis Racing said.

"The entire Artemis Racing team is devastated by what happened," Artemis Racing chief executive Paul Cayard told reporters in Alameda, the city in eastern San Francisco Bay where the team is based.

"Our prayers are with Andrew Simpson's family, his wife and kids, and also the rest of my teammates. It's a shocking experience to go through, and we have a lot to deal with in the next few days in terms of assuring everybody's well being."

Cayard said the catamaran was "under control" but that the team's first concern was for its people.

Simpson won a gold medal in sailing's Star class at the 2008 Olympics in Beijing and silver at last year's Olympics, when Britain was the host nation.

Swedish Artemis team member Magnus Augustson told Sweden's daily newspaper Aftonbladet he was shaken by the accident and greatly saddened by the loss of a friend.

"I was the one who found him. It is the worst thing that has ever happened," he told the paper.

"We had been sailing for a couple of hours and everything had been going great, but then suddenly the boat tipped over. I don't really know what happened, I haven't seen any pictures since I am still very shaken by it."

The boat was built using special materials to be as lightweight and good as possible, he said.

"The whole thing was very scary. I fell off the boat, but jumped on board again. We knew how many people had been on board but we hadn't found everyone. So we started searching, lifting and looking around. But it is a very large boat and everything is so heavy, and there was a lot of wind."

Augustson told Aftonbladet it had taken "a long while" to find Simpson. "We have a medic with us and he did everything he could to try and resuscitate him. But there was nothing we could do," he said.

"Now this makes you wonder. ... It feels a bit ridiculous to be doing sports right now. It feels unnecessary. He had a kid and a wife. And he was a good friend."

Members of Britain's Royal Yachting Association also said they were devastated by the news.

"Andrew is someone I've worked closely with since the age of 16 -- he was a great talent," performance director John Derbyshire said in a statement.

"He was a huge inspiration to others, both within the British Sailing Team and across the nation, and our deepest sympathies go out to his family at this terrible time."

Stephen Park, the Royal Yachting Association's Olympic manager, said Simpson was "a fantastic sailor who got the best out of everyone he sailed with. He was much loved and will be sorely missed by everyone in our close knit team."

The America's Cup is the oldest trophy and most prestigious trophy in sailing, dating more than 150 years. Teams from only four nations have won it: the United States, Australia, New Zealand and Switzerland. The New York Yacht Club held the cup for well over a century.