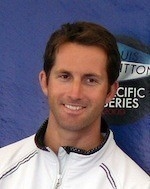 Ben Ainslie lives for sailing. He grew up near the sea, and he wants to retire on the ocean wave.

But before then, the most successful yachtsman in Olympic history is taking on one of the biggest challenges his sport has to offer -- the America's Cup.

From dominating the world of dinghy racing as a fiercely competitive individual -- who once famously warned his rivals, "You don't want to make me angry" -- the 36-year-old is now learning to helm towering 72-foot multihull catamarans.

"I really love these boats because they are very physical, they're very dynamic, they're fast, exciting and the racing is very close, and I think it's great to watch on TV now," the Briton told CNN's Human to Hero series.

"The top speed of these boats is around about 30 knots, or 35 miles an hour, which is pretty quick when you're that close to the water."

While Britain has a strong naval history and has had a lot of sailing success in the Olympics -- Ainslie won four golds and a silver medal -- it has never won the America's Cup, the elite competition in yachting that is funded by billionaires and traditionally dominated by the U.S. since it started in 1851.

"All my career the America's Cup has been a goal, I've always wanted to be with a winning team -- preferably a winning British team -- and I really felt that I'd done all I could at the Olympic level," he said.

"We've never won it so I think there's something there in our maritime history ... we really need to put that record straight."

Ainslie has set up his own team with a view to taking part in a future America's Cup, but for now he has taken on a role as helmsman for the second boat run by defending champion Oracle ahead of the 34th edition of the race in San Francisco in September, making him effectively a reserve to its No. 1 Jimmy Spithill of Australia.

His JP Morgan-sponsored BAR team -- which is supported by Oracle -- finished third in the final event of the America's Cup World Series in Naples this month, competing in smaller 45-foot catamarans...