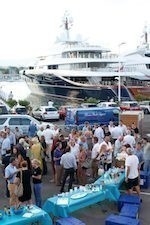 Over 300 people turned out on September 6th on the IYCA for the launch of the ASAP Logbook related to the development of Port Vauban.

ASAP, which is the Association in support of the development and activities of the Port of Antibes has two new goals:

The delivery of the 2014 Logbook to the new town managers and the launch of ASAP's workshops.

In ASAP’s point of view there is a real economical emergency for the development of the Port.

Action must be taken today in order for Antibes to remain competitive in relation to other marinas around the Mediterranean.

The presentation on Tuesday September 3rd summarized the reasons why:

Thus ASAP wants to encourage collaboration among its members to identify and shape the specifications for the development of the port, and a summary will be presented to the town in May 2014 (after the local elections).

By then, ASAP also wants to inform the Antibois of the economic challenges faced by the port. Local residents are often unfamiliar with these, and the importance of the port, as well as local businesses, to the overall success of the town. According to a study by the Chamber of Commerce, locally the sector accounts for around €150 million, supporting over 600 jobs across 195 businesses and shops. In addition to this, there are important economic benefits associated with winter storage of boats and accomodation for crew, involving a further 6,000 people.

A series of eight workshops was launched at the BBQ on 6th September, each one tailored to the particular business in question, ranging from local shops, hotels, services and suppliers, yacht management, crew, boat owners and fishermen.

The aim of these workshops: to help the town and the port to jontly determine the right goals, as well as the constraints, and to encourage the sharing of constructive ideas in support of the project.

Every person in Antibes concerned by the port is invited to participate by registering to join ASAP (registration is free).

You can also read OnboardOnline's feature on the redevelopment of Port Vauban:

The Fight for Antibes