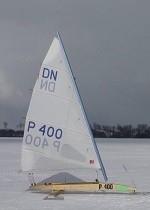 It’s a rare sight of a sport that drew thousands of spectators in the late 1800s, when Hudson Valley gentry like the Roosevelts and brewer and New York Yankees owner Jacob Ruppert raced their yachts on lengthy courses up and down the river north of Poughkeepsie. Commodore John E. Roosevelt — FDR’s uncle — built the 69-foot Icicle and formed the Hudson River Ice Yacht Club in 1869. A 46-foot version of the yacht was later clocked at more than 100 m.p.h. FDR so loved his own iceboat Hawk – a gift from his mother in 1901 — that he included it in the collection at his presidential library

I sail a newer type of iceboat called a DN, after a competition the Detroit News held in the early 1930s for an inexpensive iceboat design for ordinary citizens. On Thursday, I drove up to a 1,000-acre estate near Barrytown to take advantage of the rare ice on the Hudson on my own boat, as well as to see as many of the ice yachts as I could.

This estate belongs to one of the old Hudson River families and is jumbled with tractor parts, boats and barns in various states of repair. A stuccoed mansion sits on a hill overlooking the river; in a muddy parking lot below are the trailers iceboat owners use to transport their craft. The property owner encourages them to launch from his site, a small cove in view of the Kingston-Rhinecliff Bridge. To get to it, you have to drive down a half-mile private dirt road, across a rusty bridge over the railroad that runs along the river’s edge, and down a steep slope to a “pit” area on the ice. The tides that reach this far up the Hudson raise and lower the ice plate by several feet during the day.

The ice yachts are called stern-steerers after the skate in the back that steers them. Most have a long central beam, frequently hollow, clamped to massive runner planks near the mast that carry the forward skates. An oval pod at the stern, often with elegant varnished rails and turned stiles, carries the sailors. One sailor steers and the other handles the sheets, or control lines for the sails; both struggle to stay on board when the boat “flickers,” or spins out like a car on ice. Sitting in a basket at the end of a 50-foot beam, the centrifugal force can be fierce.

I didn’t see any flickers Thursday, when the winds were light and variable. But we sped along at 20-30 m.p.h., racing to the western shore where the ice was piled 6 feet high along the edge of the open ship channel, and back toward the mansions on the eastern bank. It was a rare pleasure sharing the ice with these 100-year-old yachts, with their varnished spars, yellowing cloth sails and intrepid pilots clinging to the handrails at the stern.