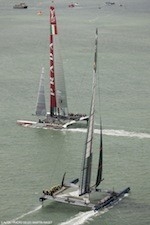 SAN FRANCISCO -- Sweden's Artemis Racing may have lost its first race in the preliminary series of the America's Cup on Tuesday, but skipper Iain Percy -- whose best friend was killed during the team's tragic capsize last spring -- said it was a triumph to get so close.

"I can't believe we managed to pull off what we have in the last two months, how much effort and emotion," Percy told reporters Tuesday afternoon. "It was a huge milestone to get to today."

Artemis Racing lost by only 2 minutes to Italy's Luna Rossa Challenge in Race 1 of the Louis Vuitton Cup semifinals. With winds gusting to about 23 mph, the finish was the closest in the challenger series that will determine who takes on America's Cup defender Oracle Team USA beginning Sept. 7. Emirates Team New Zealand, which beat Luna Rossa in every race in the round-robin competition and heads straight to the Louis Vuitton Cup finals, is the likely challenger.

The second race of the best-of-seven semifinals begins at 1:15 p.m. Wednesday. Spectators can watch for free from Marina Green or Piers 27/29. It's the first time in America's Cup history that races are close enough to watch from shore.

Artemis had only trained for eight days on its new boat but nailed a spectacular start Tuesday and was ahead of Luna Rossa at the first mark. Luna Rossa, which has racked up more than 80 training days but had equipment trouble just minutes before Tuesday's start, quickly passed Artemis on the downwind leg.

Being more experienced on these 72-foot, wing-sailed, hydrofoiled catamarans was a clear advantage for Luna Rossa, as the Italians rode their foils downwind more efficiently than Artemis did. Once it took the lead heading toward the second mark, Luna Rossa never looked back.

Luna Rossa helmsman Chris Draper said he was proud of how quickly his team reacted when the plastic film on the wing began peeling off. A crew mate scurried up to make the fix with three minutes to spare before the start.

The Swedish team has struggled ever since the May 9 capsize. Many, including team members, didn't think it was possible either the boat or the crew would be ready to race in time for the semifinals. Not only did the team have to rebuild its second boat that was already under construction to improve its safety and delay its start into the Louis Vuitton Cup, but the team had to restore its morale after losing crew mate Andrew "Bart" Simpson when he was trapped under the wreckage.

Percy grew up sailing with Simpson and won gold and silver medals at two Olympics as his sailing partner. He called Tuesday a "real mixed emotions day because we wanted to be sailing with Andrew. But we feel such pride in our accomplishment."

Artemis seemed to be the sentimental favorite among spectators lining Marina Green and Piers 27/29 on Tuesday.

"Good luck! Go Artemis," called out spectator Jane Shaw of Atherton as the catamaran raced past. "We're giving them all the support we can."