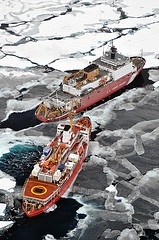 Experts are warning that the new Arctic shipping routes that have opened up as ice-ways continue to melt create new opportunities for invasive marine and insect life to spread further north.

A. Whitman Miller and Gregory M. Ruiz of the Smithsonian Environmental Research Center have recently issued a warning to their fellow scientists that the increasing popularity of two new Arctic shipping routes for commercial trade will significantly raise the likelihood that new invasive species will make their way into harbors they were never able to reach prior to 2009.

According to an editorial report written by the Smithsonian scientists, the Northwest Passage through Canada, and the Northern Sea Route are two routes that recently became more available for use by large commercial ships as the Arctic Ice sheet continues to melt away.

"The first commercial voyage through the Northwest Passage-a carrier from British Columbia loaded with coal bound for Finland-occurred in September 2013. Meanwhile, traffic through the Northern Sea Route has been rising rapidly since 2009," according to a recent Smithsonian press release.

In their report, Miller and Ruiz claim that the use of these routes could increase by 20 percent every year for the next 25 years - even when only accounting for travel through Antarctica, not to it.

This, the scientists write, will present plenty of opportunity for invasive species to find their way into the packing wood and even ballast of trans-continental ships - hitching a free ride to new ecosystems that may not be prepared for their arrival. Invasive insects, which are heartier than most marine life, are already well known in most shipping countries. Even with a change in international shipping standards that has reduced the rate at which invasive species spread, wood boring insects like the Emerald Ashe Beetle still inflict massive devastation on disrupted ecosystems.

However, thanks to sharp aquatic and climate changes through the Panama or Suez Canals, marine life hitchhikers have never been much of a problem, as they have difficulty withstanding the shock of these changes.

The arctic routes, however, are consistently cold. As long as a species can survive cold temperatures of a "short" trip across the northern hemisphere, they will find themselves in unexplored and vulnerable waters in no time.

"The good news is that the Arctic ecosystem is still relatively intact and has had low exposure to invasions until now," said coauthor Greg Ruiz in a statement. "This novel corridor is only just opening. Now is the time to advance effective management options that prevent a boom in invasions and minimize their ecological, economic and health impacts."

The editorial report was published in Nature Climate Change on May 28.