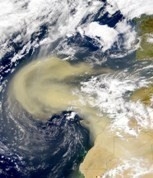 Each summer, microscopic dust particles kicked up by African sandstorms blow thousands of miles (kilometers) across the Atlantic to arrive in the Caribbean, limiting airplane pilots' visibility to just a few miles and contributing to the suffering of asthmatics trying to draw breath.

The phenomenon has been around as long as there's been sand in the Sahara Desert. But it's attracting ever more attention from regional scientists who say the clouds have grown, even if there's no global consensus on the issue.

In recent days and weeks a particularly large cloud dusted eastern Caribbean islands, made for hazy skies and intense, tangerine-tinted sunsets off Havana, drifted over Mexico's Yucatan Peninsula and was detected as far away as Wyoming. In satellite images provided by NASA, the enormous, smoky clouds can be seen wafting westward from Africa covering hundreds of square miles. From the ground, they can bring a faint haze.

While the clouds have mostly been treated as a meteorological curiosity by TV newscasts, scientists say periodic masses of dust may have important climactic consequences, even hindering hurricane formation to some degree. NASA has been sending unmanned drones into tropical storms this year to study the phenomenon.

Experts say particulate matter found in the clouds may also be cause for health concerns, and are calling for more study to understand their potential impact.

"It is a matter of great magnitude, interest and importance for health," said Braulio Jimenez-Velez, a specialist in molecular and environmental toxicology at the University of Puerto Rico at Mayaguez, who is researching the issue.

African dust has prompted two health alerts this year in Puerto Rico for asthma sufferers and people with allergies, and the Dominican Republic also issued a lower-level warning.

Airborne particulate matter is connected to respiratory disease worldwide, usually among people with existing problems such as asthma. Parts of the Caribbean, such as Puerto Rico, have high asthma rates. However, no direct link between African dust and higher rates of asthma or lung cancer has been established.

The phenomenon is similar to the giant dust storms that paint the skies yellow in Asian metropolises and can travel all the way to the U.S. West Coast — only the African clouds produce even more dust. A 2011 study in Atmospheric Chemistry and Physics estimated that North Africa is behind more than 70 percent of global dust emissions.

Charles Darwin may have suspected as much back in 1832, when he collected the grime that caked the HMS Beagle at the Cape Verde islands.

"The dust falls in such quantities as to dirty everything on board. ... It has often fallen on ships when several 100, and even more than 1,000 miles from the coast of Africa," Darwin wrote. Analysis showed microorganisms and plant silica in his sample.

Since then, increasing human activity has changed the composition of the clouds.

Scientists say they contain trace amounts of things like metals, microorganisms, bacteria, spores, pesticides and fecal matter, though there's no evidence that the quantities are enough to pose a threat. Joseph M. Prospero, professor emeritus of marine and atmospheric chemistry at the University of Miami, said African dust sampled in Barbados also had elevated levels of arsenic and cadmium.

"The specific impact on health is not known here or anywhere else. It has been extremely difficult to link specific particle composition to health effects," said Prospero, lead author of a paper on the dust to be published in September by the bulletin of the American Meteorological Society. "So it cannot be said what effect all this dust has, but there is reason for some concern."

Eugenio Mojena of Cuba's Institute of Meteorology said the particles are believed to originate in the semi-arid Sahel region south of the Sahara Desert, where farmers raise livestock and employ chemical fertilizers and pesticides.

"Today's dust is not the same as what Darwin studied," Mojena said. Before, "it didn't have pesticides or herbicides."

Some experts worry iron in the clouds may pose a threat to coral by feeding populations of algae and spores that damage it, though it's still a subject of debate. The clouds can also complicate air traffic by reducing visibility to less than 3 miles, said Jason Dunion, a researcher at the National Oceanic and Atmospheric Administration.

On the flip side, the clouds may inhibit the formation of tropical cyclones in the Caribbean.

While experts disagree about the changes in the dust clouds over the decades, all agree this year's cloud was remarkable.

Mojena said the dust arriving in Cuba has risen 10-fold in the last 30 years after severe droughts in northern Africa, though Omar Torres, a specialist in atmospheric physics at the NASA Goddard Space Flight Center in Maryland, said satellite studies since 1980 do not show increased Sahara dust emissions beyond normal seasonal variability.

Even so, "this year's advancement all the way to Wyoming was totally unexpected," Torres said. "I never saw anything like that in recent years."