Yachting News » Of Interest » 750kg of Cocaine Seized on Yacht
« BACK

750kg of Cocaine Seized on Yacht 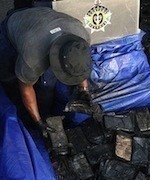 An international law enforcement operation has seized 750 kilograms of cocaine bound for Australia.

The drugs were found on a yacht in a Vanuatu port, hidden underneath concrete which required a chisel to access, and are estimated to be worth about AU$370 million (NZ$424 million).

Australian Federal Police agents joined Australian customs concealment experts and US officials in Port Vila on Monday to examine the massive drug bust, one of the largest Australian law agencies have been involved in.

The boat, known to authorities as the ‘Raj’ but renamed ‘Scope’, was docked and no one was on board when the seizure was made.

No arrests have been made at this time.

The drug bust is the largest made under Project Cringle, an operation set up in 2010 by the Australian Federal Police, Australian Customs and Border Production and the US Drug Enforcement Administration targeting criminal organisations using the South Pacific as a transit point and staging area.

Customs Compliance and Enforcement national director Karen Harfield said there was a sophisticated concealment of the drugs in the lower engine compartments and around the keel area of the hull.

“Certainly the coverage made it particularly difficult - the actual ability to access the gaps where the drugs could be concealed meant you had to use a chisel, rather than being able to open compartments or pull compartments apart,” Harfield said.

AFP Serious and Organised Crime national manager, Assistant Commissioner Ramzi Jabbour said the success would make an impact on trade in Australia, but work remained to be done

“We’ve been exceedingly successful - on this occasion we’ve taken the legs out from underneath them, but we’re not resting on their laurels.”

“With respect to the price of the commodity [cocaine] on our streets, this is an indication that it is readily available, but efforts like this will certainly make an impact.”