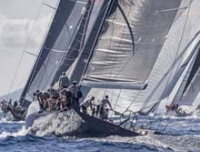 The Yacht Club Costa Smeralda (YCCS) will host a full schedule of events including two World Championships - the Rolex Maxi 72 Worlds and the Audi J/70 World Championship - as well as the Audi Sailing Champions League and the One Ocean Forum.

With the first half of the sporting season now completed, the Club is preparing for an equally busy time in September. Before then there will of course be the Club's participation in the traditional Trofeo Formenton and in the Palermo - Montecarlo offshore race, as the competing yachts are expected to pass through an obligatory gate off Porto Cervo between 23rd and 24th August approximately.

The Maxi Yacht Rolex Cup & Rolex Maxi 72 World Championship (3-9 September) already boasts 48 pre-enrolled yachts, while the Audi J/70 World Championship (12-16 September) has tallied up an unprecedented number of entries. No less than 173 boats will be competing from 24 nations, a record participation not only for a one-design class, but also for a keelboat world championship.

The boats racing in the Maxi Yacht Rolex Cup & Rolex Maxi 72 Worlds cover a wide spectrum of craft over 60 feet in length and will be divided into various categories based on their technical and performance characteristics. The largest Maxi yacht enrolled is the 36-metre cruiser Viriella, owned by YCCS member Vittorio Moretti, while one of the fastest will be the "pure racer" Rambler; 27-metres in length and fresh from Line Honours victory at the Rolex Fastnet Race. The 33-metre Ribelle, which placed second on her debut outing in Porto Cervo in June, will also be worth watching, as will the Baltic 112 Nilaya.

At the other end of the fleet will be the "smaller" vessels such as Arobas and Lorina 1895, both Swan 601s, the 60-footer Wallyno, the day racer Spectre, and the Carroll Marine 60 Durlindana. As always the Wally fleet will be densely populated with 13 boats competing, while both the Southern Wind and Nautor's Swan shipyards will also be well represented.

Defending champions in their respective divisions Bella Mente, Atalanta II, Wallyno, Open Season, and Win Win are all returning for the 2017 edition. Bella Mente, two-time winner of the Maxi 72 World Championship (2015 and 2016) will be up against Cannonball, Caol Ila R, Momo and Proteus. The combination of top-level competition, a unique natural setting and the exclusive social events organised by title sponsor Rolex have been attracting significant numbers of Maxi yachts to Porto Cervo every September since 1980.

"This will be the 28th edition," commented YCCS Commodore Riccardo Bonadeo, "we have been organising this regatta since 1980 and I would like to thank Rolex for their support. YCCS has always had a particular bond with Maxi yachts and their owners and we look forward to welcoming them each year. This year will be an extra special occasion as we celebrate our 50th anniversary together."

The extremely long entry list for the Audi J/70 World Championship features many familiar names including defending champion Joel Ronning with his Catapult fielding John Kostecki on tactics. Several other American teams look set to be serious contenders including Relative Obscurity, which placed third in the European Open Championship, and Brian Kean's Savasana with Olympic 470 sailor and  former Melges 24 world champion Stu McNay on board.

Representing Italy will be young YCCS member Claudia Rossi on Petite Terrible, two-time European J/70 champion and a candidate for the world title in 2016. Carlo Alberini with his Calvi Network and tactician Branko Brcin wil also be in the running while in the Corinthian fleet Gianfranco Noè's White Hawk will be one to watch.

The YCCS 50th Anniversary Regatta will be held between these two events, on 10th September, and will be open to all yachts of over 20 feet with an ORC, ORCsy or IRC measurement certificate. Given the large numbers of J/70s, the fleet will have a separate start and real-time scoring. This will be a unique opportunity for racing and cruising boats to take part in the celebrations to mark a significant anniversary in Italian and international yachting. The month concludes with the third edition of the Audi Sailing Champions League (22nd to 24th September), the final for teams from top yacht clubs around Europe having qualified through their individual national leagues. Winner in 2016 was the team representing the Deutscher Touring Yacht-Club and more than 30 teams will fight it out in a series of flights on board the YCCS J/70 craft.

With the sporting events taken care of, the Yacht Club Costa Smeralda's activities then move to Milan where the One Ocean Forum will take place on 3rd and 4th October. The event is supported by UNESCO and the SDA Bocconi Sustainability Lab. Advocated by Princess Zahra Aga Khan, President of the YCCS Board of Directors, this will be the first Italian forum addressing the theme of sustainability relating to marine and coastal environments. The initiative, which will become a recurring appointment, will be the highlight of the activities to celebrate the Yacht Club Costa Smeralda's 50th anniversary.