The countdown is on for the 2018 Samui Regatta as boats from around Asia are heading to Thailand's second most popular island destination for the final event showdown of the 2017/18 Asian Yachting Grand Prix from 26th May to 2nd June. Now in its 17th year, Samui Regatta has been dubbed the 'Tropical Island Regatta' where daily prize-givings are on the beach at Host Sponsor Centara Grand Beach Resort Samui, the racing conditions are fast and the weather is warm. Top yachts and sailors from around the region come to compete each year and this year the fleet looks to be one of the most competitive ever.

Leading the charge in class IRC Zero is the 66-foot Alive (AUS), skippered by Duncan Hind. A newcomer to Samui Regatta, but a familiar face in Hong Kong and on the Australian circuit, Hind and his crew are up against some tough competition in the form of five TP52s – defending champion THA72 (THA), skippered by Kevin Whitcraft; Ark 323 (CHN), lead by Li Honguan and sailed with an all-Chinese crew; Freefire (HKG), skippered by Sam Chan; Team Hollywood (AUS), skippered by Ray Roberts; and Team Ulumulu (MAS), skippered by Troy Yaw. These are joined by Sarab Singh's well-campaigned Windsikher II out of Singapore, a past winner in Samui. “This is one of the most competitive IRC Zero line-ups we've ever had. Five TP52s plus the Welbourne 52 Windsikher II and 2017 Hong Kong to Vietnam Race Line Honours winner, Alive. It's going to be an exciting five days of racing,” commented Simon James, Samui Regatta Race Director.

The larger yachts will be joined by a dinghy fleet of youth sailors from Samui, Phuket and Phangan Island, who will be competing in the Samui Youth Challenge on the opening weekend (Saturday 26th and Sunday 27th May), and for the first time at the regatta there will be Kiteboard foil racing with the event hosting the first round of the 'Asia & Oceania - KTA Hydrofoil Series' which will be held 31st May to 2nd June. Foiling kites will be making their debut at Samui Regatta for the first time.

Known as the “Home of Samui Regatta”, Centara Grand Beach Resort Samui has been the Host Sponsor and headquarters since the very first year in 2002, and has become well known for its regatta hospitality which culminates in the final night's Gala Dinner – the highlight of the Asian yachting circuit. Centara are joined by a host of other sponsors and island businesses, which together have gotten behind the regatta and supported the event as a platform to promote Samui's marine tourism credentials to the world.

“From local businesses to award-winning hotels and international brands, the support we receive is incredible and it's these sponsors and partners that help to make Samui Regatta such a great event for both participants and Samui Island. The positive images and media coverage that spans the globe shows Samui Island in its best light and we're very proud to be working with all our sponsors and partners, many of which have been with us since day one,” added James.

The 17th Samui Regatta will take place 26th May to 2nd June, 2018 headquartered at Centara Grand Beach Resort Samui, and is organised by Regattas Asia in conjunction with the Samui Yacht Club Regatta, under the auspices of the Yacht Racing Association of Thailand, the Municipal of Koh Samui and the Sports Authority of Thailand. 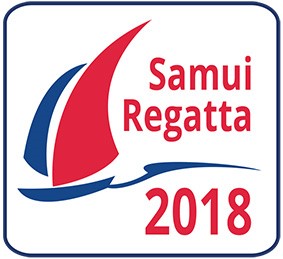 Since its birth in 2002, Samui Regatta has grown to attract the best yachts in Asia and a large spectator following who come to Samui for great sailing, parties and to experience all the island's world-acclaimed hospitality. Samui Regatta is the final event of the AsianYachting Grand Prix season.

2018 is the regatta's 17th year and is proudly hosted by Centara Grand Beach Resort Samui, which is widely regarded as the "Home of Samui Regatta". The regatta is organised by Regattas Asia in conjunction with the Samui Yacht Club Regatta, under the auspices of the Yacht Racing Association of Thailand, the Municipal of Koh Samui and the Sports Authority of Thailand.