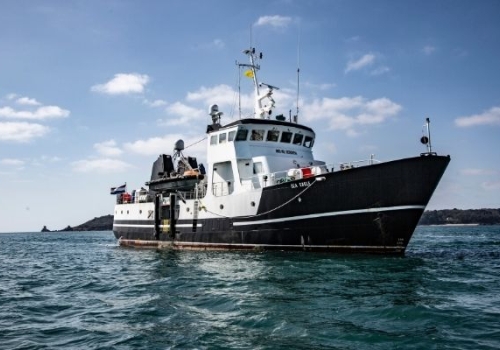 For the past six months, Sea Shepherd has been working behind the scenes to quietly acquire, register and equip the latest addition to its fleet of marine conservation vessels: the Sea Eagle.

The new ship was purchased through funding from Allianz SE, Allianz Technology, and Allianz Italy as part of Sea Shepherd’s new two-year partnership with Allianz to address the issue of plastic marine debris polluting the ocean.

“Sea Shepherd is very excited about this new relationship, which will help us to spread the message that fishing gear is one of the main causes for ocean pollution,” says Sea Shepherd global CEO Captain Alex Cornelissen. “This new vessel will be dedicated almost exclusively to our work in the Mediterranean Sea., both as a huge improvement for our existing campaigns like Operation Siso, as well as the perfect vessel to start exciting new campaigns.”

The Sea Eagle is a 40 metre former French pilot boat equipped to accommodate 19 crew and carry two small boats. Having been built for the Atlantic Ocean, the ship is capable of navigating the roughest seas. Despite difficulties caused by the global pandemic, the Sea Shepherd crew worked tirelessly to ensure a smooth transit of the Sea Eagle from Thyborøn, Denmark to Syracuse, Italy, where it’s now preparing for upcoming campaigns in the Mediterranean Sea.

“Sea Shepherd is very grateful for the support of Allianz,” says Captain Cornelissen. “Together we will address the issue of abandoned fishing gear, looking at ways to convert the ocean plastic into materials we can re-use or sell in order to further fund our work and create more awareness.”

Sea Shepherd currently has 11 ships in its global fleet, known as “Neptune’s Navy”, used in direct-action campaigns to defend, conserve, and protect marine wildlife and ocean habitats around the world.