The Extraordinary Journey of a Unique Superyacht Build 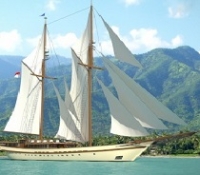 This summer Camper & Nicholsons welcomed a very special yacht to the charter fleet - the 65.2m (213’9) Lamima.

Offering the charm of an Indonesian two-masted phinisi with opulent luxuries of modern yacht design, her build is a nautical masterpiece.

Lamima's design was completed in 2011, and her build began early in 2012. Boat builders of Ara, Sulawesi, skillfully began her construction - using only traditional techniques throughout the build, they have created a wooden sailing yacht like no other. Now available for charter, Camper & Nicholsons takes a look back at her inspiring story and remarkable build. December 2011: Esteemed yacht designer Marcelo Penna finalises his vision for what would be the world's largest wooden sailing yacht.

January 2012: The masterminds behind Lamima gather in Bira to make sure everything is ready for the start of her build.

March 2012: Lamima's keel is laid on the beach at Bira, south Sulawesi. Honoring the ancient boat-building traditions of the Konjo tribe, the keel-laying ceremony includes rituals of prayers, ceremonial sweet rice and incense burning, all of which are carried out in front of the whole village.

July 2012: Progress is quick and Lamima's ribs and "lepe, lepe" are completed.

September 2012: The first few planks of Lamima's deck are fitted. October 2013: Project Manager Gareth Lewis joins the team to manage Lamima to her completion. A shipwright by trade, Gareth passion for wooden vessels (he has been involved with many high profile projects including sailngs yachts Mirabella V and Sojana) brings an infectous energy to the build.

January 2014: The Konjo tribe perform a launching ritual to ensure Lamima's health and prosperity (Indonesian tradition believes that boats have their own life spirit). After the ceremony Lamima is ready for the water. With no machinery it takes 45 days, 50 men, 18,000 sand bags and the spring tide of a full moon to float Lamima – the largest traditional boat-launch ever undertaken in Indonesia.

March 2014: Lamima is towed from Surabaya up the Gulf of Thailand for her final fit-out. Italthai Marine (ITM) in Samut Prakan, Bangkok, installs her technical systems and finishes her to the highest quality.

August 2014: Work on the interior starts under the creative hands of Stanley Tang from Archistudio.

For more information on Lamima, her build or her availability for charter, please contact Camper & Nicholsons.