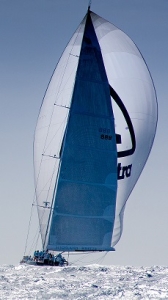 “Street art” will have a place of honor at the sixth edition of Les Voiles de St. Barth with the special presence of street artist Cyril Phan, who will be creating a live work of art on a boat sail canvas.

Known throughout the world under the pseudonym of Kongo, street artist Cyril Phan will be in St. Barth in April. His arrival ties in perfectly with the wishes of the organizers of the Les Voiles de St. Barth through the creation of an event that combines sport, lifestyle and friendliness, where art has its rightful place.

“Since 1991, I have lived in Guadeloupe for half of each year. The Caribbean is a massive source of inspiration to me,” explained Phan. “My presence at Les Voiles de St. Barth this year is the result of a meeting I had with François Tolède last summer. He suggested I give a performance on a sail, which will subsequently be auctioned off for charity. Painting on a sail is something new for me, even though I'm used to painting pretty much anywhere. It's going to be intriguing to do my thing within the context of Les Voiles de St. Barth.” Moreover, it's a work that may well appear on the poster for the 2017 edition of the Caribbean sailing event. Though he does not sail himself, this traveling enthusiast is delighted at the prospect of coming to St. Barth in the spring. “I'll paint the sail live in front of a public audience during the regatta,” said Phan. “I love discovering other worlds. Three months ago I discovered the world of aviation, which involved painting a plane, and I'm continuing to explore the world of aeronautics through several collaborations, one of which is with the Fondation St Exupéry, he continues. The world of sailors strikes a logical chord with me and my own journey. It's a thrilling world, filled with people who are passionate about what they do. Sharing my passion with them and discovering what makes them tick is bound to be an enriching experience.” Kongo, an artist with multiple influences

Born in 1969 to a Vietnamese father and a French mother, Cyril “Kongo” Phan arrived in France as a political refugee back in April 1975 after the fall of Saigon. After a childhood spent in the South of France with his grandparents, in the early 80s he headed off to Brazzaville in the Congo, to join his mother.

It is here that he discovered a passion for art. “I have friends there who were just back from New York and introduced me to hip hop. I was immediately drawn in by the dance and the music, but more as a spectator rather than an actor,” says the man for whom drawing has always been a primary mode of expression. It was not until he returned to France that he discovered an interest for graffiti. “I was lucky enough to meet the people creating the graffiti and the drawings and they got me into it,” he recalls.

Banding together, they created the MAC group. “Graffiti arrived in France with the hip hop movement after the stencilists. Back then we were just a group of kids from Le Faubourg St. Antoine. There were only 100 or 200 street artists who essentially geared themselves towards the microcosm of graffiti. We began by tagging walls, living in the moment. Nothing was planned. Today, there are thousands.”

The frescos they painted on big walls meant that the group gained renown across France as well as internationally. “We were invited to paint in Europe and in the United States, which brought us in touch with the entire international graffiti scene at the time. That fuelled my lust for travel, which has always been part and parcel of my life.”

During a trip to Asia, Kongo met the director of the Asian branch of the Hermès fashion label, which was to mark the artist's first steps in the luxury market. “He gave me the opportunity to paint the window of the Hermès shop at Hong Kong airport. The shop window proved to be a tremendous success, to the extent that the parent company in France invited me to reinterpret its famous silk scarf by creating the ‘graff.’ It was an incredible opportunity to work on such a fashion icon.

” In the space of two months, the collection had sold out across the world. “This adventure, that began with a meeting and went on to nourish both our worlds, demonstrated that the luxury environment is not so far removed from that of graffiti as they both reference travel, handwork and singularity.”

Now recognized as one of the world's key figures on the graffiti scene and a man capable of developing his practice to achieve genuine artistic maturity, Kongo continues to exhibit his works right around the globe, while collaborating with prestigious companies, such as French crystalware manufacturer Daum, for whom he is making a crystal sculpture. “I'm very interested in French expertise, which I'm trying to retranslate through a graphic vocabulary.”