Yachting News » Fleet » Mixing it up in the Caribbean
« BACK

Mixing it up in the Caribbean 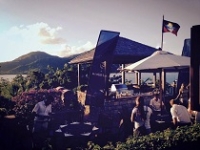 World renowned bartender, Barrie Wilson, will visit Antigua for the annual Boat show at the marina from December 4-11 to introduce World Class, the world's leading, most prestigious luxury drinks training programme, to the global yachting community.

The equivalent of the bar-tending “Oscars”, World Class was created by Barrie in 2006 for Diageo Reserve and, since its launch, has enjoyed unprecedented success, becoming a global leader of cocktail trend-setting while elevating the craft of bar-tending, with winners instantly being propelled into the global limelight.

Having been involved in the bar industry for most of his life, Barrie Wilson started mixing cocktails in Edinburgh, Scotland, and swiftly won a number of awards, recognising him as one of the best bartenders in the UK. Some of the world-famous bars for whom Barrie designed and created drinks menus include Gleneagles and various Terence Conran sites in Britain, along with the creation of bespoke cocktails for a number of prestigious events including the MTV awards, Monaco Grand Prix and the Cannes film festival.

Since joining Reserve brands in 2005, Barrie has worked in the creation of new products and the development of signature serves that are enjoyed globally, while also launching Reserve Brands in Asia and Africa, and travelling the world to share his knowledge on current cocktail culture.

Designed to hero the bartender and give them a platform to showcase their unique skill, World Class is now active in over 50 countries with Barrie responsible for spreading trends to the bar-tending community and being part of overseeing the global competition. “I am looking forward immensely to my trip to Antigua to introduce the yachting community to the exciting World Class luxury drinks programme and to help unearth the island’s best bar-tenders,” says Barrie, who was also part of the team that launched the “tonight we Tanqueray” platform, and the new Tanqueray No TEN bottle design.