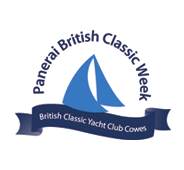 After five days of exciting and challenging racing at Panerai British Classic Week 2015 the weather sadly let the fleet down on the final day, when strong winds and torrential rain forced the abandonment of the sixth and final race of the series just before the start.

Whilst disappointed not to race the fleet was in agreement with the decision and happily retired to the marina to relax and prepare for the Panerai British Classic Week Gala Prize Giving Dinner.

Griff Rhys Jones, actor, comedian and owner of the 1948 Olin Stephens 57’ Bermudan Yawl ‘Argyll’, had the gala dinner audience in stitches with anecdotes of classic yacht ownership.  His analogy that “Sailing a classic boat is like taking a piece of Chippendale furniture and throwing it into the sea, and then steering other bits of Chippendale furniture within inches of it.” particularly appealed to them.

Amandine Rohmer of Panerai was then welcomed to the stage by British Classic Yacht Club (BCYC) founder Tim Blackman to present the overall victors with their trophies and unique Panerai Plates.

With straight wins in both Class 4 and the combined Fleet races, the 1897 William Fife III designed Cork Harbour One Design ‘Jap’, the oldest boat in the regatta and at just over 30’ one of the smallest, was named Panerai British Classic Week Champion 2015.  The second time her name has been added to this illustrious trophy, the first being in 2012. ‘Jap’ was sailed this week by owner David Sherriff, Martin Payne, Toby Mumford, Lauren Fry, Mark Yeabsley, Olympic Rowing Gold Medallist Zach Purchase, and with Paralympic Gold Medallist Andy Cassell helming all the points series races, plus America’s Cup legend Harold Cudmore guest helming on Thursday.  Martin Payne summed up the crew’s feelings saying, “It was a fantastic event and I’m really proud of the team. Andy helmed brilliantly, the foredeck crew (all four of them) sailed with both skill and fun, whilst Sheriff was on the main and I called the tactics. It’s wonderful when a crew really works together and that happened for us this week.  The competition was tough too with so many beautiful boats that were seriously on the pace to race against.”

As well as a Panerai Radiomir 1940 3 Days Acciaio watch ‘Jap’ also received the British Classic Yacht Club Racing Trophy, the Cereste Trophy and Panerai Plate for Class Four. In his acceptance speech David Sherriff thanked his fellow competitors for their hospitality, Panerai for their incredible support of the classic yacht movement and the BCYC under whose flag ‘Jap’ had the honour of sailing this week.

The Flight Trophy for the yacht placed second overall in the regatta went to Giovanni Belgrano’s ‘Whooper’, which also won the Commodore’s Cup for Class 3 for the second successive year.  A 39’ Laurent Giles sloop built by Woodnutts of Bembridge in 1939, she was intended to be a shallow-draft cruiser, but her natural reaching and downwind speed exceeded expectations. Anecdotes from Peter Bruce recall Channel crossings in the 1960’s at average speeds over 10 knots – exceptional for the era!

The Event Trophy for Class 0 was won by John Caulcutt, Jamie Matheson and Stephen Hemsley’s ‘Mariquita’.  Designed by Wiliam Fife III and launched in 1911 ‘Mariquita’ was one of four 19 Metres, that raced successfully until the start of the Great War. She spent more than forty years as a houseboat on the Orwell before being fully restored by Fairlee Restorations in 1991.

Regatta Chairman Sean McMillan’s ‘Flight of Ufford’ won the Lutine Trophy for Class 1’s Modern Classics.  A Spirit 52, ‘Flight of Ufford’ was designed by her owner as a fast cruiser for himself and his wife Jenny.  This is her tenth year at the regatta where she has achieved considerable success over the years.

BCYC Commodore David Murrin’s ‘Cetewayo’ claimed the Corinthian Cup for Class 2.  Designed by Laurent Giles and built by Morris and Latimer in 1955, this 48’ fractional sloop has been the subject of an ongoing restoration and improvement programme that has included a complete rebuild of the transom rudder and steering allowing extra winches to be installed, facilitating the use of higher performance modern race sails.

The Universal 8 Cup for the first 8 Metre was awarded to Avia Willment’s 1926 Frank Morgan Giles designed ‘Siris’, which Classic Boat ranks as one of their Top 200 most beautiful yachts in the World.

There were also a number of fun presentations such as The Stiff Drink Trophy, which went to Jeremy John’s ‘Matambu’ for sheer determination in completing the Around The Island Race, finishing precisely 1 second before the time limit. The Lallow Cup for the best-presented new entrant was awarded to ‘Jour de Fete’, and the Seamanship Award presented by Classic Boat went to Murdoch McKillop’s 8 Metre ‘Saskia’ for their rapid rescue of bowman Mark “Gonz” Gonzolez who slipped overboard during an unexpectedly quick tack.

The regatta concludes today, Saturday 25 July, with a Parade of Sail past the Royal Yacht Squadron and Cowes Green at 11.00.