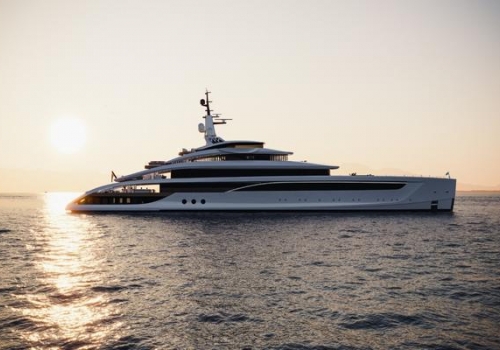 Benetti unveiled plenty of exciting news for the yard during Monaco Yacht Show 2022. Its strategy rests on three main pillars: a tradition of craftsmanship, technological innovation and advanced process engineering, and partnerships with leading international naval design and architecture firms. For Benetti, this is a period of important milestones, with record-breaking economic and commercial results.

Azimut|Benetti Group CEO Marco Valle commented: “We have invested heavily in R&D in recent years to develop new boats and the results are outstanding: almost a month after the start of the new yachting season, a record-breaking 23 launches are planned, almost two a month. The prospects for the future are very positive: we began in September with the launch of a 50-metre B.Now and will conclude in August with the launch of a 68-metre B.Century. The order backlog is trending upwards, with new model deliveries planned until 2027.”

Sebastiano Fanizza, Benetti's Chief Commercial Officer, presented the most important features of Iryna (B.Now 50M), making its premier in Monaco, the B.Now 60M and the new B.Now 67M OASIS. “The B.NOW family is a significant achievement for Benetti, comprising 50, 60, 67 and 72-metre models and now one of the brand’s bestsellers, with 20 units already sold.”

Sinot Yacht Architecture & Design’s Paul Costerus, the company’s Senior Yacht Designer & Project Manager, outlined the distinguishing interior design features of the B.Now 67M Oasis in terms of their concept and size. It is a yacht that enhances the idea of continuity between interior and exterior spaces. The lounge on the main deck offers sweeping views of the outside world, with sliding glass doors, huge glazed surfaces, and interior decor featuring muted hues. The design is delicate, with numerous details and finishes that add warmth to the setting.

Andrew Collet, RWD Project Manager, outlined the construction process for the new B.Now 60M, whose dynamic lines add value to the Oasis Deck® solution by favouring the use of natural light and unrivalled continuity with the water. The OASIS philosophy continues to evolve, with indoor and outdoor spaces that can be redefined to offer new hospitality destinations based on the needs of the owner and their guests. It is a solution that articulates a new lifestyle concept, amplifying contact with the water and the authenticity of life lived on board in a dynamic and informal style that is also chic and refined.

Sebastiano Fanizza then presented the evolution of the B.CENTURY family, created in partnership with Cassetta Yacht Designers.

Born out of the success of multi-award-winning yachts Triumph (65 m) - premiered at the Monaco Yacht Show - Metis (63 m), Zazou (65 m) and Calex (67 m), the B.CENTURY family includes custom yachts built on a highly successful engineered platform enriched by five models created to offer solutions never seen before and a distinctive signature look: two 55-metre projects, one with a generous Sun Deck open on all sides and the other in which the Upper Deck is transformed into an Owner’s Deck, with the master suite in the bow and a private terrace. A 62-metre yacht with incomparable content, a rational and elegant 68-metre model, and a 75-metre unit that introduces new layout concepts like the pioneering solution of a Pool Club and a Sea Club designed on two different levels. Every yacht is uniquely innovative in terms of its style, layout and onboard concept. “Their distinguishing character trait is the formal clarity of the sweeping lines that describe the yachts’ contours, featuring an uninterrupted flow of lines that define volumes expressing Benetti’s unmistakable stylistic identity”.

There is a special focus on offering different types of propulsion system, with technological solutions that reduce environmental impact. This is a concrete commitment that Azimut|Benetti Group began to address over ten years ago, contributing to the creation of an increasingly sustainable yacht-building industry. The B.NOW and B.CENTURY families are available with traditional, hybrid or diesel-electric propulsion systems.

The project springs from the yard’s intensive interaction with clients on yachts over 80 metres long, as well as from the need to answer questions raised by the market about Benetti’s idea for a real-world project in this segment. “Project ORO” is a window on the future of Benetti, which maintains its pragmatic approach to construction. It is a project that takes advantage of the latest propulsion technology and minimises the dimensions.

“During the development of “Project ORO,” said Giorgio M. Cassetta, “we wanted to seize the opportunity to express numerous innovative concepts, aspiring to bring them together in a unique yacht. By developing a language of style featuring great visual purity and strong characterisation of the main masses, and by renouncing the criteria of civil architecture in favour of a freer and more fluid approach, we have tried to propel the project into an attainable future. We hope the bold content recognises a series of desires that customers in this size range frequently express and are unlikely to have found fulfilled by the boats they have looked at so far.”