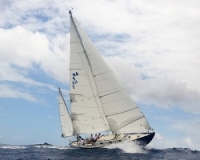 The Single Handed Race had a reaching start south, followed by an upwind leg to the Pillars of Hercules, a penultimate leg downwind to Rendezvous Bay with a beat back to finish.

Winner of the Under 45' Class was Don Ward's Luders 44, Frolic. The 45' and Over Class was won by Saphaedra. Don Ward has lived in Antigua for 45 years and is a tremendous supporter of Antigua Classic Yacht Regatta, his observer on board was Hans Lammers, who often helms Frolic, when fully crewed, and is the caretaker for the boat. “Frolic has a secret weapon.” smiled Don Ward. “The jib has a self-tacking system and it was highly useful today, tacking on the shifts, especially in Rendezvous Bay, where Frolic got a big lift. 'Classics is such a wonderful regatta, I look forward to it every year.”

“For the Concours d'Elegance, we are looking at key areas such as presentation, originality to concept and condition.” Commented Alan Hutchinson, Chairman of the Lunenburg Shipyard Alliance. “There are discretionary areas such as whether the crew are living aboard and the history and stories behind these fascinating boats. For each class, these criteria are weighted in different ways. The Lunenberg Shipyard Alliance was started five years ago so that we could collaborate on projects, including the restoration of Bluenose II, which we are extremely proud of and the winners will receive trophies made from reclaimed mahogany from the restoration project. We have a team of very skilled craftsmen, whose families have been shipwrights for generations and we work with world-renowned designers for new projects. By supporting this regatta, we hope that the participants will come our way and we have a lot to offer in Nova Scotia; fantastic cruising in an unspoilt location that is barely on the map.” The overall winner for the Lunenberg Shipyard Alliance Concours d’Elegance was Mary Rose. Class winners where Mary Rose, Dragonera, Elena, Genesis, Katrinka and a special mention for Lorema and Samsara was the winner of the Arne Frizzell Prize presented to the yacht with the greatest attention to structural integrity and safety.

Tonight the 'Classics will be partying at the Antigua Yacht Club with the Concours d’Elégance Trophy Presentation and courtesy of the Race Committee, complimentary bubbly will be flowing with the Panache steel band on stage. From Friday, 18th April, the magnificent fleet of classic yachts will begin a four-day race programme with fun filled parties ashore.