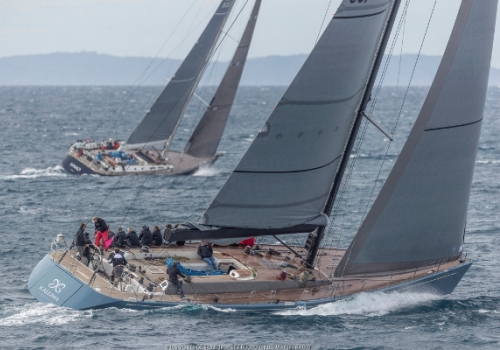 Despite the wind turning light and complicated for the last two days, maxi yacht competition at Les Voiles de Saint-Tropez was successfully held on three out of four days. The event that traditionally concludes the inshore maxi sailing season in the Mediterranean was lengthened to two weeks this year. The smaller yachts raced in week one leaving the maxis (yachts of 18.29+ m) to race exclusively over four days in the second.

Although announced well before the COVID-19 first struck, the new format has worked well with the pandemic with fewer boats and people milling around Saint-Tropez’s picturesque but usually packed port. It enabled the week one fleet to leave the harbour before the maxis arrived. Also, instead of racing in the more remote bay off Pampelonne Beach as they did last year, the change enabled maxi racing to take place in the prime spot of the Baie de Saint-Tropez with fixed, spectator-friendly start and finish lines immediately off the town.

Over the four days of maxi racing, which concluded today, competitors enjoyed the full range of conditions from 25 knots, right at a top of their range on Tuesday, followed by 40 knots on Wednesday, when racing was wisely cancelled early on, and then concluding with two of the lighter, more tricky days for which Saint-Tropez is famous.

Delighted with the week was the crew of the Farr 100 Leopard, chartered this week to Dutch internet entrepreneur Joost Schuijff. While not the longest yacht racing, Leopard was the fastest and continually led the IR1 class around the race track. The yacht, originally built for Mike Slade, scored bullets today and yesterday, but was second to Jacob Foale's Swan 80 Umiko in Tuesday’s opening race. However with the wind topping out at 33-34 knots on the long offshore course, that race was certainly the most fun for Leopard’s charterer and her experienced crew. “We had a cracking sail at 25-28 knots on the way home - that was a great race,” enthused Leopard’s racing skipper Chris Sherlock. 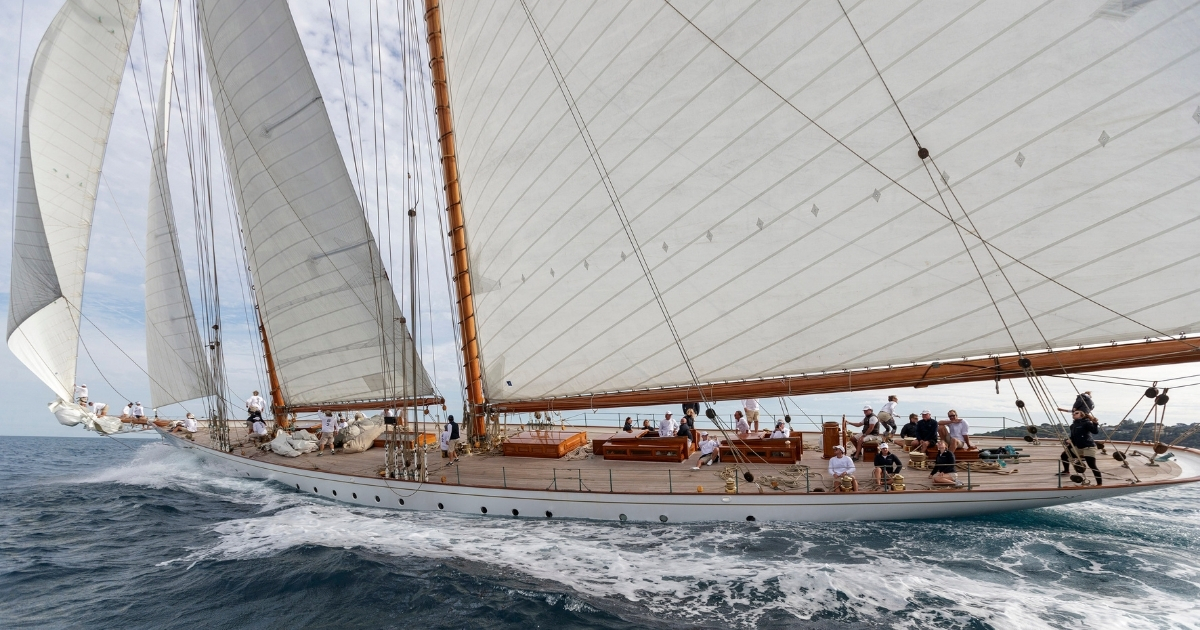 A 2-1-1 scoreline was enough to secure Leopard a well-deserved victory in IR1, only outstripped in this respect by Elena of London, the 41.6m modern classic schooner, which scored a perfect scoreline against the 38m long gaff schooner Puritan in the GTR class competing for the Trophée Bessarat de Bellefon.

Sherlock praised the charterer. They were due to race Leopard at the Maxi Yacht Rolex Cup and when that got cancelled, they instead went training. Sherlock attributes that valuable time, with the same crew as has been in Saint-Tropez, combined with a new sail wardrobe, to their success this week. “Hats off to him for sticking to his guns. Without that time there, we wouldn’t have won this week. We came here to win IRC and we did, so we are very pleased.”

The highly experienced Sherlock was also complimentary to the Société Nautique de Saint-Tropez’s race committee. “They did a great job. In the heavy air race they correctly sent us on a long 46 mile course down to the the Porquerolles (islands of Hyeres). Then there was a cancelled race – and they made that call right - we went sailing anyway and were seeing 38-40 knots on the way back! Then yesterday – they got us out of the bay and we did a two or three hour race, which they read well. And today we sailed a couple of laps of the bay, purely around marks. So we have had three very good days.”

Having tried for so many years to win at Les Voiles de Saint-Tropez, there was an extended ‘champagne debriefing’ on board Ryokan 2 post-race. “Everyone is happy because of our first win here,” said Olivier Douillard, this week on mainsheet, passing over his usual navigator’s hat to former 470 World Champion Jean Francois Cuzon. Ryokan 2’s crew has remained largely the same for almost nine years. This, combined with modifications made to the yacht recently are what helped secure her victory, believes Douillard: “We were starting well and the boat has been progressing over the last two or three years. We have made some changes especially to the rig that improved a lot our light wind performance while we still have good performance in strong winds. It was a real pleasure to sail here with such a great crew, with lots of experience and very friendly.”

While Jean-Philippe Blanpain’s Vismara-Mills 62 Leaps & Bounds (formerly Roberto Lacorte’s Super Nikka) won yesterday’s race, today it was finally the turn of Benoît de Froidmont’s Wally 60, Wallyño, which last year won the International Maxi Association’s Mediterranean Maxi Inshore Challenge on these waters.
“It was my best start ever – we were 10cm away from the line. It was really amazing,” enthused de Froidmont of today’s race. “It was very tricky with one or two complicated transitions. The forecast was very light, but finally we got some wind and started at 1400. We were lucky.” 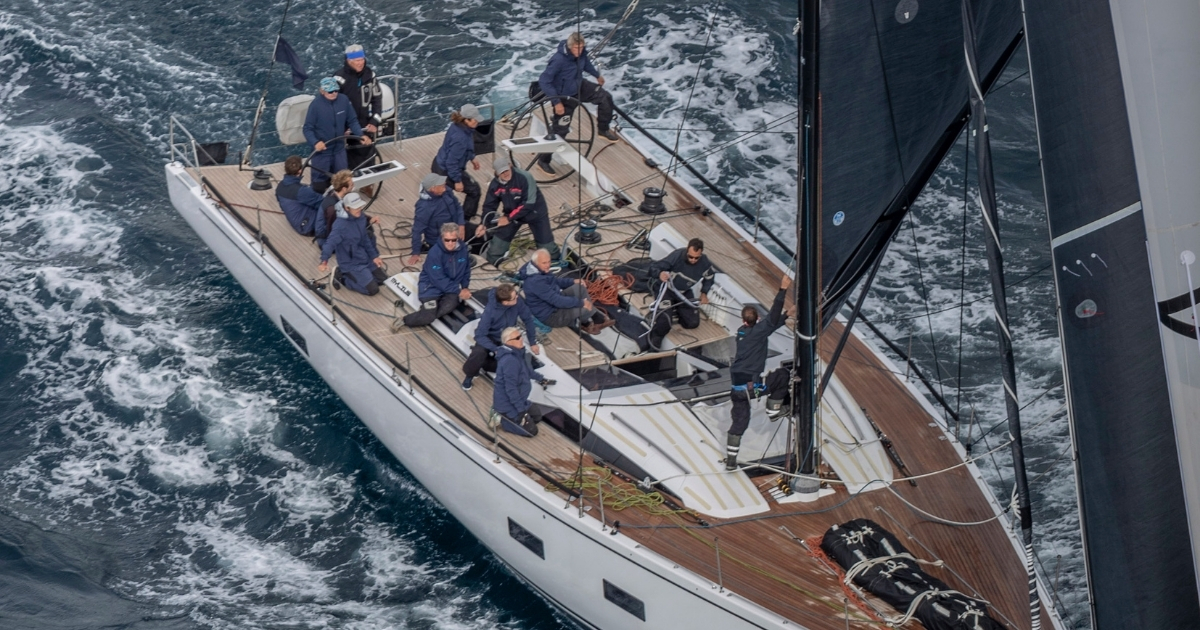 De Froidmont is President of the International Maxi Association, that this week assisted the maxi yacht competition in Saint-Tropez fiscally and by contributing highly respected international race officer Ariane Mainemare to the SNST’s race team. He said: “A lot of people were doubting the new format, but talking to different owners, they all seem to be very positive about the new two week formula and having the maxis racing together. From a racing point of view it was very good." As to competing on the Baie de Saint-Tropez and the fixed start and finish lines, he added: “It is a very good show for people ashore but also for us - it was a great choice.”

While Renaud Rupert's B60 Criollos won the almost exclusively French six boat IR3 class from Richard Bedere’s Bordeaux 60 Mr Beelzebuth, the tightest racing was certainly in IR2, where Philippe Ligier’s Wally 80 Ryokan 2 prevailed, with a 1-2-2 scoreline over the three races.

Full results can be found on the event website here.