Tuiga gets the first round in the XXI Illes Balears Clàssics 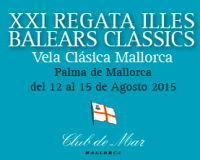 The vessel from the Monaco Yacht Club is now head of the general ranking in the opening of the legendary 15-meter class in the Bay of Palma.The XXI Regata Illes Balears Clàssics began this noon and offered a first class show, as expected from the presence in Club de Mar Mallorca of a 56-vessel fleet from 13 countries.

The Embat, thermical wind typical in the Bay of Palma, didn't blow until almost 1 p.m, but it didn't fail ot offer one of the most beautiful sights in the sailing sport: the competition between the four 15-meter class survivors, built in the early XX century and that, because they share a series of common features, the can race in real time. The cruiser modern sailing, with its rigging and latest technology, is undoubtedly faster, but cannot be compared with the image these sailing cathedrals offer that 'sail as if the flew', as described by Joseph Conrad. The 'Tuiga' (1909), captained by Alessandri Bernard, made to the first position in the FI15 ranking, after racing windward / leeward, followed by the 'Mariska' (1908). The Duke of Medinaceli's old vessel, with a Monaco Yacht Club pennant, sailed first almost all the time and show a higher maneuver skill, perfectly executed by its silent crew.

The 'Hispania', HM Alfonso XIII's old vessel and considered Spain's classic fleet flagship, spoiled her options upon breaking the spi (bow sail for prevailing winds) during the first haul-down prior to turning the leeward mark in the first race. This incident made her cross the finishinf line 8 minutes later than the Tuiga. In the second race, won by the Mariska, the Spanish vessel was once again beat by her opponents.

This was the first time these four vessels faced each other in the Bay of Palma, although they had already raced in Mahon and Cadiz's regatta fields. Manuel Nadal, Club de Mar Mallorca's commodore, was excited about this debut: 'We are privileged to have these vessels, to see them sail together in the Bay of Palma is impressive. We hope we can have them here many more years, because they add an international prestige to the Illes Balears Clàssics and Club de Mar'.

The rest of the classes, except the Dragons, did coastal races, between 15 and 18 nautical miles, leaving the island of Sec on the port side. The south wind blew intensely from 8 to 13 knots.

Marigan and Enterprise to seek renewal of their title

The day's winners were Albert Kusak's Enterprise (1939), placing themselves in position to repeat their last year victory in Marconi in their particular duel against Manitou (1937); Tim Liesenhoff's Mariga (1989), also seeking a renewal of their 2014 Gaff rig victory; Corsaro II, from the Italian Navy, in Classics, only 13 seconds away from their countryboat Emeraude; and Jens Ricke's Legolas, in RI Classics.

The first day had no significant incidents, except Cami II's loss of the mast in the first haul. Apparently, the dismasting was a consequence of the bow's stay rupture. The crew came unharmed.

On Friday, 13 Latin Sail vessels will join the rest. The Regatta Committee will maintain the same coastal race programme for Classics and Vintage in windward-leeward races for the FI15 and triangles for Dragons and Latin Sail. The forecast announces a change in the wind direction towards NW and a clear sky.

Alessandri Bernard, Tuiga's skipper: 'We are obviuosly very happy with our start in the regatta. The key was in the start and in the maneuver by the first mark. This is just the first day, we believe we have enverything in our favor to win the Illes Balears Clàssics. We have a professional crew'.

Tim Liesenhoff, Marigan's skipper and owner: 'When we started, we chose the wrong side, but we were able to recover from that and win the first round. We have been sailing together for many years and that makes us react fast. We are happy because this victory gives us chances to win our third Illes Balears Clàssics in a row in Gaff rig'.