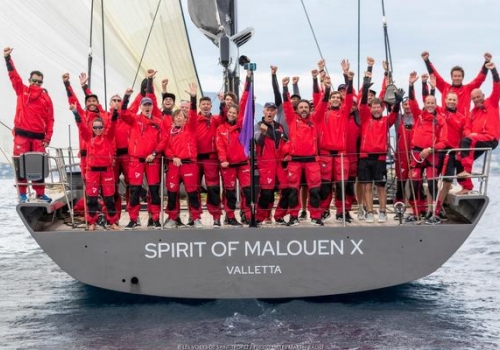 At the end of a challenging week of maxi racing at Les Voiles de Saint-Tropez when the wind never exceeded seven knots, conditions on the final day did at last prove too light and fickle to complete a race. While all four classes for the 46 boat fleet got under way, the wind vanished and at 1500 the Société Nautique de Saint-Tropez’s race committee, including the IMA’s Arianne Mainemare, abandoned racing. Thus results from Friday stand.

In the Maxi 3 class, Alessandro Del Bono’s ILC maxi Capricorno faced stiff competition this week from Terry Hui’s usually unbeatable 77ft Lyra. All was going well until they were scored OCS in yesterday’s race leaving them a point behind Lyra going into today. If the breeze had held today they appeared in good shape to recover their overall lead, but it didn’t. Nonetheless the Italian team had done enough to secure them the bigger prize – the IMA Mediterranean Maxi Inshore Challenge for 2022, which had started back in early May at PalmaVela. Capricorno results came from the IMA Maxi European Championship in Sorrento, winning both the inshore racing prior to Rolex Giraglia and the Maxi Yacht Rolex Cup in Porto Cervo, before this week’s second place.

“I am really very happy,” said Del Bono of their performance. “The boat is really amazing: A 27-year-old boat which goes so fast is amazing. The crew is fantastic and I really love them. Today we were winning the race so I was impressed with its performance even in the light air. Without our OCS yesterday we would have won St Tropez.”

For this season they had added weight to the bulb to improve performance in medium conditions, but naturally spent most time competing in light air. Del Bono is soon to start construction of a new Capricorno which he hopes to race in 2024.

While the war was won by Capricorno, the match this week was won by the IMA Maxi European Champion, Terry Hui’s Lyra. “This whole week has been different - it was the lightest wind I have ever raced in,” admitted Hui, who at this evening's prizegiving also received the trophy for the best-placed IMA member. “So it was difficult, but still exciting, although I prefer stronger winds like 15+ knots where you have to react much faster. But the racing was very close.” 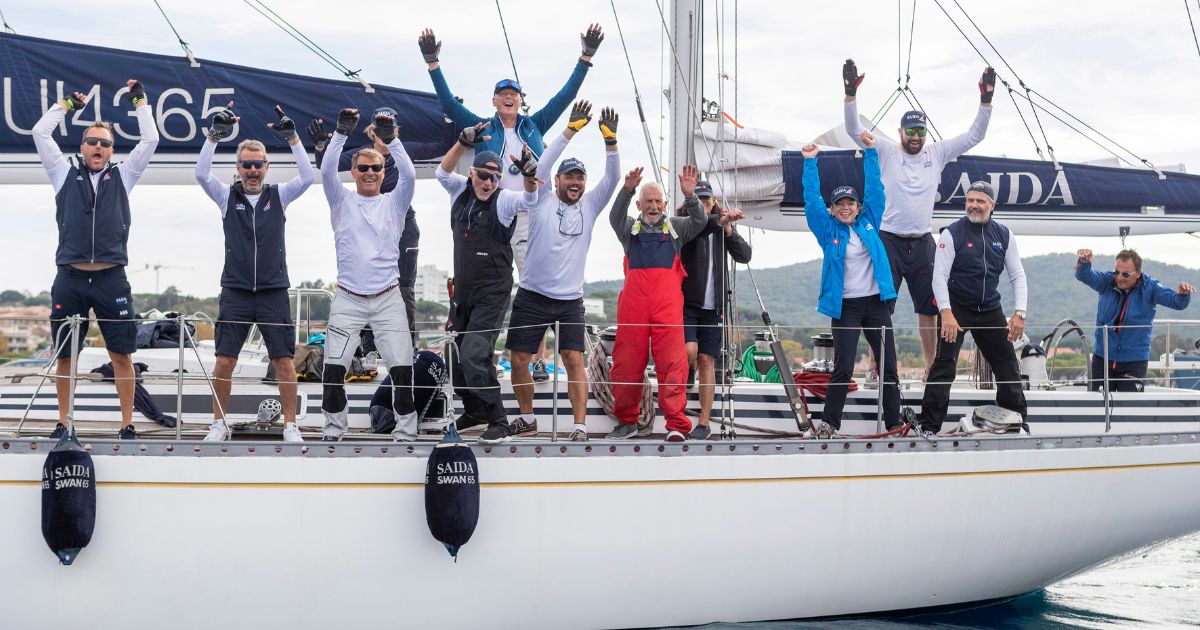 The crew of the Swan 65 ketch Saida prevailed in Maxi 4. Photo: Gilles Martin-Raget

“It was light breeze and a tricky race track,” explained Cannonball tactician Michele Ivaldi. “The starts were very important and we nailed all of them and even against very big boats. We only had a little bit of bad luck in the second race when we came second: we were leading by a lot, but on the second beat we got into a very bad lane with very disturbed air and we lost Jethou and time on North Star. Otherwise it was perfect. The boat was going very well in light breeze and all the crew did a fantastic job. It was a very needed bounce back from Porto Cervo and a good way to end the year for Dario.”

The Maxi 72s didn’t have it all their own way and local boat, Sir Lindsay Owen-Jones’ Magic Carpet Cubed made the most successful inroads finishing second in yesterday’s race, securing them third on the Maxi 2 podium behind Sir Peter Ogden’s Jethou.

“It was a shame that the race didn’t happen today, but it was just too unpredictable,” said Owen-Jones. “We had a good week and we sailed the boat well and made some good choices. Cannonball is very difficult boat to beat – I think a couple of knots more and the power of the big boats comes in but in the very light air they are much more manoeuvrable.” However he acknowledged that the competition with the other 100 footers including David M. Leuschen’s Galateia, Charif Souki’s Tango and the Farr 100 Leopard 3 was exceptional.

The closest finish was in the Maxi 1 where there was a three way points tie for the top with the 107ft Spirit of Malouen X winning on countback from the 108ft Pattoo and the Swan 115 Jasi.  This is their first win. “It is good for the project, the team and the owner because we had some disappointment in Porto Cervo after we broke our forestay,” said project manager and main trimmer Stéphane Névé. “It is good to finish the season like that.” Spirit of Malouen X differs from the other 100 footers in that most of her crew are experienced amateurs who are still on a steep learning curve while graduating from their TP52. 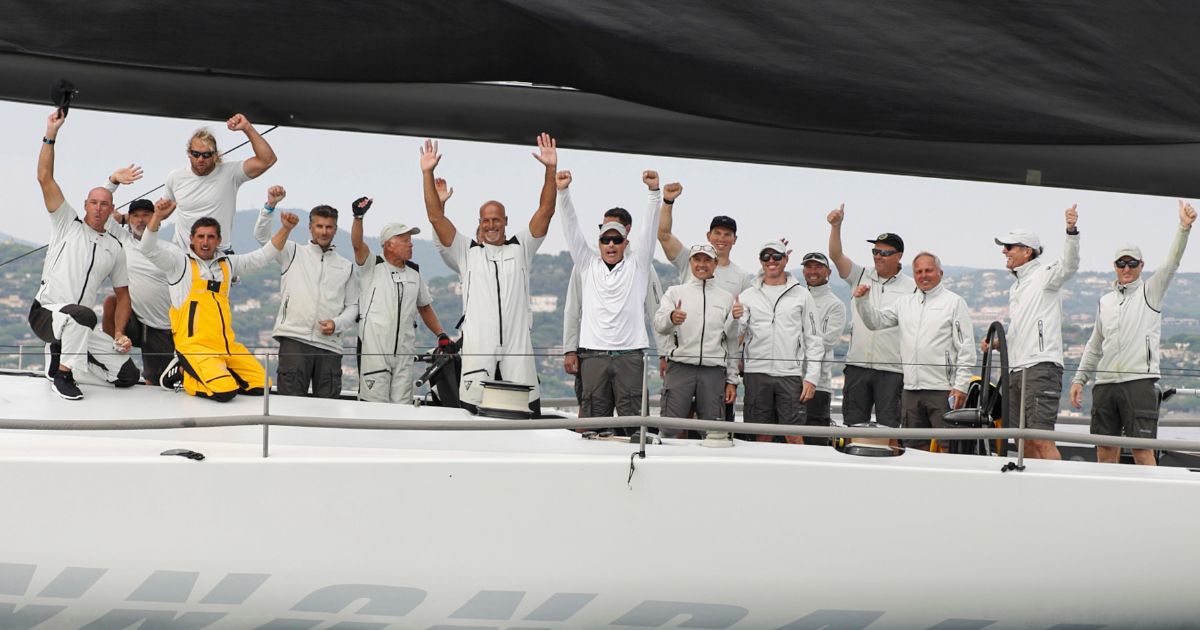 Surprisingly the biggest win was in Maxi 4 where Juerg Schneider’s Swan 65 ketch Saida came out on top by three points from the 12 metres Kiwi Magic KZ7 and French Kiss. “It was a great week. I am very pleased and very surprised we did so well,” admitted Schneider. “Half of our team was new but we had good speed and we went the right way. I thought after the second day we couldn’t win everything but in the end we did well. We always seemed to go the right way and had good tactics.”

Andrew McIrvine, Secretary General of the International Maxi Association concluded: “This has been one of our most successful events this year, despite difficult conditions. I would like to thank the Société Nautique de Saint-Tropez and their race team, including our own Ariane Mainemaire, all of whom did a very effective job. We are pleased to be able to award our perpetual challenge trophy for the IMA Mediterranean Maxi Inshore Challenge to Alessandro Del Bono and Capricorno. We look forward to returning to Saint-Tropez with a flourishing maxi fleet next year both for the Rolex Giraglia and Les Voiles de Saint-Tropez.”