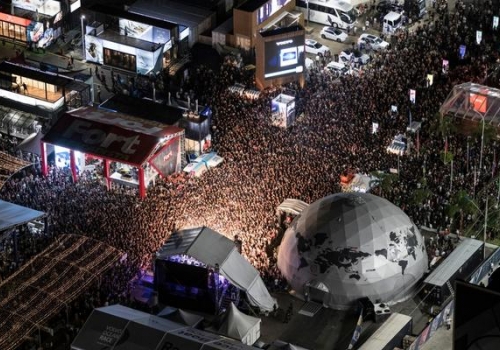 The Ocean Race is aiming to cut greenhouse gas emissions (GHGs) by up to 75 per cent for the 2022-23 race, compared with the previous edition, and working with sailing teams, host cities, partners and suppliers in a shared ambition to slash their GHGs and hold a climate positive event.

Every element of the round-the-world sailing event has been examined to understand its GHG impacts and how they can be reduced. The Race is aiming to cut emissions through a number of measures, including using significantly fewer shipping containers used to deliver the global event, reducing the number of staff travelling internationally, careful management of resources such as materials, food, waste and water, as well as aiming to power the event sites with 100% renewable energy. The Race will now take place over six months, compared with nine months for the previous edition, which will also reduce the overall impact.

In parallel, the Race is collaborating with its race teams, host cities and partners to collectively estimate, reduce and carefully account for their race-related GHGs. Logistics partner GAC Pindar and hospitality agency ATPI are working closely with The Ocean Race to create new systems to accurately track and report the GHG impacts of logistics and guests, with automated systems simplifying data management for the Race.

To achieve the ambitious goal of making the event climate positive (drawing down more GHGs than are produced), the Race will invest in ocean projects that, on behalf of the Race and stakeholders, will restore vital marine habitats while also sequestering carbon. These ‘blue carbon’ initiatives, in which mangroves are protected from deforestation or actively regenerated, are at carefully chosen sites around the world. Healthy mangrove ecosystems can lock away carbon, protect coastlines, provide important habitats for wildlife and support local communities.

Meegan Jones, Sustainability Advisor for The Ocean Race said: “Sport has the power to inspire and accelerate action and nowhere is this more important than in the race against climate change. We’re drastically cutting emissions compared with the last Race in 2017-18, but creating a climate positive event can only happen with the support and input of every organisation that the Race touches. While some event organisers offset their partners’ emissions we believe that the responsibility should be on everyone involved to play their part. By doing this we don’t just reduce the impact of a single event, but help to create change throughout the industry.”

The Ocean Race is bringing together all of the stakeholders involved in the next edition of the event, which starts in Alicante, Spain, on 15th January 2023, to drive solutions. This includes 11th Hour Racing, a Premier Partner of The Ocean Race and founding partner of the Racing with Purpose sustainability programme, global logistics partner GAC Pindar (part of the GAC Group), IMOCA, which is one of the two boat classes that will form the fleet, the race teams, hospitality agency ATPI, official clothing supplier Helly Hansen, and the nine cities that host the event across the globe. The group is supported by technical experts including Verra, who manages the world's leading carbon standard (VCS Standard) and IOC UNESCO, the United Nations body responsible for supporting global ocean science.

Some of the key activities that underpin the event’s climate positive ambition include:

Alessandra Ghezzi, Communications Director, 11th Hour Racing, said: "In the past years we've seen the increasingly devastating effects of climate change, and while the public conversation around the issue has shifted from the term 'change' to 'crisis' and 'emergency', we all need to take bolder steps to reduce our emissions. We can do this only through strategic collaborations. At 11th Hour Racing we are supporting The Ocean Race so they can provide the blueprint for running world-class sporting events while also being climate positive. All the how-to materials will be available on-line to any organisation, event, and team to set their own climate goals and strategy."

The Ocean Race is a signatory of the United Nations’ Race to Zero and Sports for Climate Action initiatives, with a commitment to halving the Race’s GHGs and contributing to a net zero world by 2040.

The work to make the next edition of the Race climate positive is part of the ambitious Racing with Purpose sustainability programme, co-created with 11th Hour Racing. The programme extends beyond both hosting a sustainable event and the immediate touchpoints of the Race and seeks to inspire new audiences, from schoolchildren to policy-makers, to take action to protect the ocean and climate. It also supports ocean research through an innovative science programme in which vital data about the state of the seas is collected by boats as they race across the planet.

For more on The Ocean Race’s work with stakeholders to create a climate positive event see here.