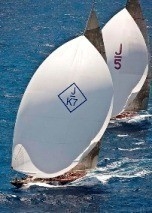 This is the 17th year of the Superyacht Cup in Palma, with 19 confirmed entries, including five sublime J Class yachtsand still the possibility of one or two more. On the back of the Caribbean superyacht regatta season, and the 21 yachts that showed up to the Loro Piana superyacht regatta in Sardinia, one could say that large sailing competition is in rude health.

This year’s event will run from the 18th to 22nd of June, technically five days, but in reality four racing days. The first day is for registration, with J Class racing on the 19th while the others do last minute sail training and spectating. All yachts will race on the 20th, 21st and 22nd, with the event ending on Saturday night with live music, and a buffet dinner at the beautiful E.S. Baluard Museum, conveniently located within walking distance of the yachts berthed in Muelle Viejo.

The biggest difference between this and previous Palma superyacht events is that this is the first time five J Class yachts have all lined up together, a spectacle that was the highlight of the St Barth’s Bucket this winter. Hanuman came out top dog against her sisters Rainbow, Velsheda, Ranger and Lionheart , who will all be looking to rectify that outcome in what will likely be different conditions to the Caribbean trades. We would expect smoother seas and lighter winds; the normally reliable sea breeze kicks in at 10 to 14 knots. Lionheart has showed great pace in many conditions. Rainbow will expect the crew work to continue to improve and, being the smallest, her lower wetted surface may help here. Ranger and Velsheda have the longest-running campaigns and both have crews that have a lot of experience of Palma Bay and the local conditions. Probably no other J has as many miles under her keel as the venerable Velsheda. She is also the only original(ish) J Class yacht here. Endeavour and Shamrock V, neither of whom will be showing up unfortunately, complete the class, with talk of more on the way. The J Class is definitely back in vogue: on a water line length to sail area ratio, nothing comes close.

Four J Class yachts lined up in England last summer, and they’ve since done the Caribbean, but this is the first time that so many have lined up in the Med, which, no matter how you look at it, is the undisputed world centre for superyachting. Do it by metres; do it by tonnage; do by monetary value. Nowhere comes close. What a ‘J’ does and is, and why they are important, cuts a few different ways. They are far from the fastest sailboats, they are woefully impractical for cruising, although they all get by, and it takes a lot of crew who can handle sharing very small living arrangements. They attract a certain kind of owner, passionate and with money to burn. Make no mistake: they are very expensive to run, especially if you race them. And why would you buy one unless you were going to show up to regattas? Velsheda’s owner was the first, in my opinion, to get owning one right. He had Bystander, a large motor yacht, built as a tender, so when it’s cruising time, he has ample room and space for his family and guests. It solves the problem of interior volume, being wide, low and very narrow. That’s precisely why they are so beautiful and impressive, once you add in the gracious overhangs and towering rigs (that term gets overused a lot, but when you see the proportion of rig to hull on a ‘J’, then you understand “towering”). J Class attracts good crew, who make them even better. They are not the easy push button sailing of modern super yachts. A J is still a good modern compromise of their original America’s Cup racing yacht pedigree, bearing in mind why they were created in the first place. America’s Cup and Volvo professionals are regular race crew additions to complement the permanent crew, as well as other experienced sailors who give their time to the miles and races to sail the owner and his guests quickly and safely round the course. Of course they get paid well, and the permanent crew especially earn it. If the gear works right, as with the other superyachts showing up, it was the permanent crew who maintained it. Spare a thought for them when the ‘rock stars’ are getting all the glory in the next magazine article. The permanent crew finish sailing, wash down, and start entertaining, repairing, and continuing daily duties. Of the other superyachts attending, certainly the designer Andre Hoek has the greatest representation of his work on display here. As a yard, Classen shipyards has to be pretty happy, especially at a time when things are tough for boatyards. But half the yachts signed up were built in Holland. No surprise that a country that has to stay afloat itself is such a prominent boat-building nation.

The second-hand market also makes selling a new build a bit harder at the moment. But for the few boats that are here and on the market, it’s also a great place to show them off. A boat in good enough shape to race round the course is certainly a good test, and a good way to get a feel for what kind of vessel she is. Among the moderns as well as overall, Maria Cattiva will be back to defend her honour as last year’s champion. On form Atalante, Drumfire, Heartbeat, Highland Breeze and Scorpione Del Mare would also feel that they are in with a shout having either won or been in the top three over the last few years. Also Salperton, on the back of her recent overall victory in Loro Piana, will feel she is nicely wound in. They are all about equal in terms of local knowledge so, as always, it will be a combination of crew work and rating that dictates the outcome. Scorpione Del Mare will probably be sailing for the last time with their present vessel, as rumour has it a new one is on the way; bigger and faster.

Palma, being a main base for sailors and boats, makes it pretty easy to find the extra crew necessary to race, and a shore side service for large sailing yachts second to none. The newly renovated Muelle Viejo is also an easy venue to access. It provides berthing in the popular old town and to the eastern side of the city, just 15 minutes by car to the airport.

Palma’s popularity and staying power are also the result of a few natural benefits in its favour. In the Med, few places this time of year can boast as reliable a sea breeze. In fact it’s the only regular superyacht regatta that is based literally in a city, thus offering a superb choice of accommodation, restaurants and shops. As mentioned before, no other superyacht regatta offers the same degree of large sailing yacht service specialists in one location, at the door step of the competing yachts. One only has to see the nearby STP boatyard at almost any stage this winter to witness the major and varied refits being carried out in a yard brimming with yachts. Last but not least there is the social aspect. While the many owners get their competitive juices flowing, it’s a great time for them to enjoy some sunshine and sangria with their guests, and also mix with their own crew. The environment of an owner charter is normally very professional in terms of the owner/crew personal dynamic. Often racing gives the crew an opportunity to show off their sailing skills, while the owners tend to be more relaxed, and more appreciative of why many of the crew are on his vessel in the first place. They like to sail. Unlike cruising, where life aboard is deliberately quiet and serene to create the tranquil getaway the owner probably envisioned when he built his yacht, racing is all action sail changes, and plenty of talking. A lot of information needs to be exchanged between the bowman, trimmers, helmsman, tactician and navigator. They in turn have departments to control and more communication to carry out. The generators and hydraulics are also being tested to their limits, so there’s a lot of communication, monitoring and sweat for the engineer.

At the end of the day, a yacht is not a business; it’s an extravagant luxury that captures a wealthy individual’s imagination and sense of adventure. Directly and indirectly, they generate a huge amount of employment from the day they are commissioned. So given the economic situation the world finds itself in, don’t be jealous! Watch, enjoy, and follow a spectacle that, whether you like yachts or not, is hard not to describe as impressive.