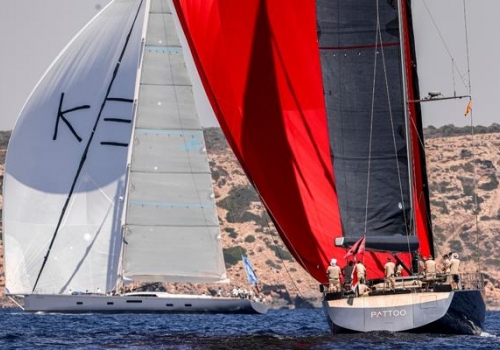 The entire Superyacht Cup fleet made the Bay of Palma their arena on June 30 as Europe's longest-running superyacht regatta hit its stride with another day of sparkling Mallorcan sailing conditions.

Pantaenius Race Day saw slightly lighter breeze than Wednesday's opening races for the J Class, but the 11-strong fleet showed their mettle in a hard-fought three hours-plus coastal race, with the outcome of the three class contests in doubt until the final legs on each course.

The four superb J Class yachts got the party started with their own fleet start. From the off decisions were split, with Velsheda making a bold call to head right while Svea, Topaz and Ranger headed up the left-hand side of the course.

On this occasion fortune did not favour the brave, and Velsheda's course to Palmanova on the western side of the Bay of Palma did not pay off, with the other J Class contenders leading by a considerable margin at the first mark.

Meanwhile the elegant 27m modern classic Savannah led the rest of the Superyacht Cup fleet away, the first in a series of staggered starts which soon filled the bay with a diverse cross-section of impressive superyachts.

Racing in Class B the Pedrick-designed Savannah had her work cut out to match the pace of the 46m Ganesha, the powerful Oyster 1225 Archelon and bluewater cruiser La Belle, but she made the most of her handicap rating to take the class win.

"The committee sent us on a great course, and there were some pockets of really good breeze so you had to choose your course carefully," said Savannah's owner Hugh Morrison. "Luckily we got some of those right so it was a good day."

Looking ahead to the next two days of racing he added: "There's some fantastic competition out there and some outstanding sailors on amazing machines, and they sail differently in different conditions. The conditions are expected to be stronger tomorrow so we will just try to hang on to their coattails and do the best we can."

Class A saw a tussle for supremacy between the 32m Farr-designed carbon flyer Kiboko 3 and the similarly high-performance 33m sloop Pattoo, with both making a striking impression as they raced on a leg up the eastern side of the bay framed by the rugged coastal cliffs at Badia Gran. At the finish it was Kiboko that edged the contest.

Owner and helm Juan Entrecanales said: "We are of course happy with the result today, the conditions were good, though we made a late start we were able to keep on going."

Asked about the origin of her name – Kiboko is Swahili for hippopotamus – he added: "The boat was built in Cape Town, and I wanted to reflect her African heritage. A hippo is fast – fat yes, but fast as well, and the name sounds good."

In the J Class the leading trio were locked together around the course, with none able to make a decisive break away. Svea claimed the on the water win and was able to preserve the top spot once the handicap was applied, closing the gap at the top of the overall table to one point behind Topaz, who were runner-up. Ranger claimed third with Velsheda unable to close the gap for her first leg deficit.

Back ashore after racing SYC's host, the Real Club Náutico de Palma, turned on the style once again with the celebratory North Sails & Southern Spars happy hour on the RCNP terrace together with the prize-giving.