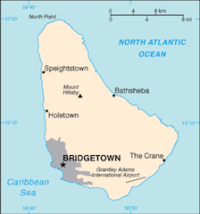 The breezy conditions, although slightly less gusty than the previous day, still caught out a few, testing crew and equipment to the limit. Among the casualties of the day was Steven Ginger’s Beneteau 40 – Spirit of Venus – that was in a collision with Ben Armstrong’s Hobie 21. Thankfully no one was injured but Buckeroo Too, the Hobie, suffered damage forcing both boats to retire from racing. In the Racing class frontrunner Idea – John Wilson’s Reichel Pugh 78 from the UK, suffered gear failure, which also led to a retirement.

Having started the day on equal points at the top of the fleet with Ralph Johnson’s Beneteau First 53 Rapajam, there was all to play for in this final race of the series. However, on the 15 mile beat along the south coast Idea’s jib gave way. Clint Brooks, skipper, said it was a great disappointment but looking on the bright side, it was fortunate it happened before Tuesday’s big Round Barbados Race, which is the key reason they are at the event. “Very frustrating today because the tack fitting for the headsail failed which allowed the jib to go up the tuff luff, once up it pulled clean out the tuff luff. Then the battens at the top of the small jib we were using flew aft and punched a hole in the mainsail. We initially thought we would continue under main only to the next mark which wasn’t far off and then hoist the kite downwind, however we didn’t want to risk any more damage with a hole in the main, so we called it a day.”

Rapajam, on the other hand, had another successful day, with the 14-strong team – ranging from four to 74 years of age – demonstrating how to mix serious racing with serious fun. Having won yesterday’s race they were keen to repeat their performance, which is exactly what they did. Not only did they win again today, but also with just four points, they won the overall class series from Peter Lewis’ J/105 – Whistler – with which finished on eight points

Johnson (74) Rapajam skipper, commented: “We have a good team of friends and family and everyone has fun on this boat. Plus the wind never blows under 10kts in Barbados so good racing is guaranteed.” Peter Gilkes, navigator, added: “We were very disappointed Idea had to retire today because we had a nice start with them and were with them at the windward mark. They didn’t really get away from us and we thought, quite seriously we could beat them on corrected time, so it would have been good to see if that had been the case.”

Tom Slade’s Santa Cruz 52 – Renengade – from USA notched up another win today in the Cruising class, pipping David Onyon’s British Sigma 36 – Happy Morning – to the post by just one point in the overall results. Meanwhile, Mike Krimholtz and team on Dragon Magic – Dufour 38 – had to settle for third overall after an extremely consistent series.

In the Non-Rated class David Spieler and his local team on Leonora – Beneteau 47 – completed a hatrick of wins today to secure an overall class win, beating fellow Barbadian Bill Tempro on My Mistress – Bavaria 46. Another boat worthy of a mention is Ten Seven – Ian Hickling’s Catalina 40 – which scored an impressive second place today. The team from Barbados Cruising Club sailed well and their final race result elevates them to third place overall in the series.

The J/24 fleet continued to produce some of the closest racing with plenty of swapping and changing of positions to keep the racing interesting throughout the day. Robert Povey and team onHawkeye sailed a good first race and managed to beat Team Impulse across the line with, the consistently well-sailed Sugar Beach Attitude team from St Lucia, taking third place.

However, in the second and final race of the series, on a marathon of a leg along the south coast, it was overnight leaders Ian Mayers and team on Banks Esperanza who pulled ahead and led the fleet across the line at the finish, which was enough to secure an overall series win with 13pts. In second place overall was Neil Burke on Impulse, while Team Hawkeye had to settle for third.

With three wins to count, local catamaran sailor Bryn Palmer, took an overall win of the Multihull class sailing his RC30 – Silver Bullet. He also hopes to retain the multihull record in the Round Barbados Race on Tuesday.

After three days of challenging racing and lay day tomorrow, crews are making the most of the local hospitality tonight at both Barbados Cruising Club and Barbados Yacht Club. Tomorrow’s activities include a Mount Gay

Rum distillery tour at Brandons St Michael in the morning, and a trip to watch a polo match at the famous Barbados Polo Club in the afternoon.