Round Up of The Rolex Sydney to Hobart 2014 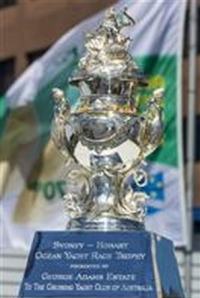 Two yachts with a shared history claimed the main prizes at a memorable 70th edition of the Rolex Sydney Hobart Yacht Race. Driven by facing her most fearsome opponent in years, Bob Oatley’s Wild Oats XI made history by claiming a record-breaking eighth line honours victory. Some 29 hours later, Oatley’s original Wild Oats arrived in Hobart with a corrected time finish that would ensure overall victory and the coveted Tattersall’s Cup trophy. Oatley’s former boat, the 43-ft Wild Rose, owned and skippered by his friend Roger Hickman, secured her second victory in the race, 21 years after the first.

Shakespearian start
Every Boxing Day at 13:00, Sydney becomes an amphitheatre for the start of the great race; a moment when one of the world’s most iconic cities comes to a standstill for the start of this 628 nautical mile offshore classic to Hobart, Tasmania. Hundreds of thousands of spectators watch from the shore, on the water, or live on television and the internet; a public start for the 117 yachts and around 1,500 competitors, before they enter a profound nautical solitude and face the unpredictable elements of nature. There were those who had travelled thousands of miles to compete for the first time, such as Polish skipper Mariusz Koper on Katharsis II: “The Rolex Sydney Hobart is such a famous race, it’s a lifetime’s dream taking part in it”; those who had made the nautical pilgrimage countless times: “It’s just something you’ve got to do, whether you say it’s the Everest of yachting, or it’s for the camaraderie, or the beauty of Hobart,” adds Hickman; and those making the journey for the final time having devoted a lifetime to the ‘great race’: “This is my last race,” confirmed 35-time competitor Ed Psaltis, handing off to his son Ben, who completed his first voyage to Hobart in 2014 on St George Midnight Rambler.

Each competitor has his or her own story; whether it’s defined by success, failure, adrenalin, frustration, personal ambition, friendship or fatigue. No two races are ever the same; something that has drawn the 50,000 plus sailors who have chosen to take part. Each journey is rich in character, emotion and endurance.

Five 100 foot Maxis started the 2014 Rolex Sydney Hobart, ensuring the quest for line honours would be the most dramatic in years. Hull damage on the first night forced Anthony Bell’s Perpetual Loyal out of the race; conditions were unsuited to the American entry RIO 100 and Ragamuffin 100, the latter skippered by Syd Fischer, who at 87 became the oldest sailor in the race’s proud history. The resulting duel was a forecast heavyweight contest between Oatley’s Mark Richards-skippered Wild Oats XI and the newcomer, Jim Clark and Kristy Hinze-Clark’s Comanche, recently launched and the latest thinking in Maxi yacht design. The two boats could not be more different in terms of aesthetic look; Wild Oats XI pale, sleek and narrow compared to the dark, imperious and ultra-wide Comanche. With stellar professional crews on both yachts, it would be left to the weather conditions to dictate the narrative.

Following a glorious Sydney start, with plenty of breeze, Comanche powered towards the Sydney Heads leaving the rest of the fleet in her wake, setting an unofficial record for the fastest boat past the first turning mark: an incredible four minutes, 35 seconds. Live television audio picked up Wild Oats XI skipper Mark Richards exclaim: ”Look at that thing go!” Which perfectly articulated how the all-conquering Wild Oats XIwelcomed the threat of a new pretender to her crown The two Maxis shadowed each other down the New South Wales coast; Comanche led for the first 24 hours but when conditions lightened, Wild Oats XI took charge proving quicker in negotiating a lighter patch of wind. “That was the key moment,” confirmed Wild Oats XI’s Spanish navigator Juan Vila.

Arriving in Hobart on a spectacular Sunday afternoon after 50 hours at sea – over eight hours outside the race record Wild Oats XI set in 2012 - Oatley’s crew enjoyed a rapturous applause from an enthusiastic public. Comanche lived up to her pre-race billing as a serious contender arriving just 49 minutes later. “Our team did an unbelievable job,” explained skipper Ken Read. “On one hand we are disappointed, on the other proud of what we put together. Both boats sailed a flawless race. They had their day, they had 12 hours of Wild Oats weather For Richards – winning skipper in each of Wild Oats XI victories – this victory was the sweetest. “It was one of those challenges you dream about. It was a hard race, the competition the toughest we’ve had. The newest, latest technology, versus our boat, which is ten years old. We always thought Comanche would be quicker; we tried to minimise the losses, constantly working out how we could attack this thing and working an angle to our advantage. Ten years ago, we would never have dreamt about an eighth Rolex Sydney Hobart win.”

Rose gold
Hickman acquired what would become Wild Rose in 1991 from Bob Oatley. Two years later Hickman – along with co-owners Bruce Foye and Lance Peckman – won the race when the boat was still called Wild Oats. It was subsequently renamed to avoid confusion with Oatley’s 100 foot Maxi.

“I did three Hobarts with Bob on this boat. When I bought the boat from him in 1991, he almost gave it to me,” Hickman explained. “I was a young merchant navy officer then. I was honoured and privileged to sail with him and the others. When I went to buy the boat, I only had half the money, so I asked Bob if he could wait while I tried to raise the rest. He said to me, ‘Roger, you were the only guy to ever go to the bar and buy me a drink, don’t worry about the rest!’”
“Fantastic, wonderful, surreal, it hasn't sunk in,” said Hickman, a Hobart native on receiving the Tattersall’s Cup. “I am so elated. Every sportsman old and young loves the feeling of competing and winning.”

Wild Rose is comprised of a 14-strong crew, including six female sailors as well as family members - Hickman’s sister Lisa, and brother Andrew, both for the first time. Passionate about the competition, by his own admission Hickman is a driven, fierce competitor. Claiming victory in the 70th edition of the race carried an extra seal of satisfaction for Hickman, a keen student of the race’s history and 38-time competitor. “I am pleased to have done more than half of the 70 races; this year is a big milestone, it shows the creativity of the people seventy years ago, the enormous efforts that have gone in.” Perhaps the appeal of the race was most poignantly articulated by Wild Rose navigator Jenifer Wells. “The fantastic thing about sailing is that it’s so challenging physically, mentally; you have to persevere and deal with what is dealt in terms of the weather, sea state. You come together as team. It’s not what happens to you during the race, it’s what you do about it.”

The two winners were awarded Rolex timepieces for their momentous achievements on the water. The values so ably demonstrated by the successful crews echoed by Rolex, title sponsor of the race since 2002 and which recently extended its commitment to the race and organisers, the Cruising Yacht Club of Australia.