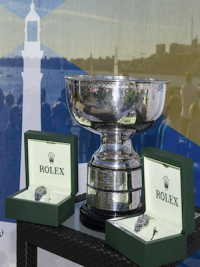 Edition 46 of the Rolex Fastnet Race commences in a month’s time. In the year of its 90th anniversary, this biennial legend promises to write an impressive new chapter. An anticipated 390 yachts from over 25 different countries sailed by 4,000 yachtsmen and women are expected to cross the start line in Cowes on Sunday 16 August for this famous 603-nm offshore race. The current record of 336 yachts was set two years ago - proof that the race’s popularity and appeal has never been richer. 2015 also marks the 90th birthday for race organizers the Royal Ocean Racing Club (RORC), formed after the start of the very first race. And, it marks the bicentennial of the Royal Yacht Squadron (RYS), from whose clubhouse the race start takes place. Both eminent yacht clubs are partners of Rolex, title sponsors of the race since 2001. Rivalries renewed
In this year of anniversaries and celebrations (explored further in a dedicated press release), a keen group of yachts will hope to crown this memorable edition by setting a new monohull race record, a feat only achieved nine times since Jolie Brise set a time of 6 days, 2 hours and 45 minutes in the inaugural edition back in 1925.

Ian Walker’s Abu Dhabi is current race record holder: finishing in 42 hours, 39 minutes back in 2011. Those keen on setting a record this time include Mike Slade’s Leopard (GBR), race record holder in 2007 and two-time line honours winner, always a strong performer in heavier conditions. Slade will renew his sporting rivalry with American George David who returns to the race with his brand new 88-ft Rambler. Slade and David enjoyed an epic tussle back in 2007. Ken Read, who was David’s racing skipper in 2007, will this time be in command of a new rocketship: Comanche (USA), Jim Clark’s impressive 100-ft Maxi launched ahead of last year’s Rolex Sydney Hobart Yacht Race and one of the early favourite for line honours. The frontrunners will need to pay attention to the clutch of highly-competitive Maxi 72s - including Bella Mente (USA) and Momo (IVB) - two Volvo 70s, Camper (AUS) and Monster Project (RUS), and two Volvo 65s fresh from their round the world exploits and untested outside their one design world.

In addition to the monohull pacesetters, a number of state of the art multihulls will be aiming to lay down their own benchmark times.

Lifetime dream
The Rolex Fastnet has always been about more than big boats and records. Victory on IRC handicap is the theoretical target of any boat in the main fleet, which includes representatives from 25 countries. In recent times the Fastnet Challenge Trophy has been lifted by a mix of crews; from the professionals on all out racing boats (Nokia Connecting People, 2003 and Rán2, 2009 and 2011) to more Corinthian competitors (Iromiguy, 2005 and Chieftain, 2007). The prevailing conditions will have their say and at the Rolex Fastnet Race nothing is guaranteed in terms of the weather. Recent editions have seen the race start delayed due to gale force winds to a relatively benign, patience-testing edition in 2013. Following the departure from Cowes, the 603-nautical mile Rolex Fastnet course takes the fleet down the English Channel passing The Needles, Portland Bill, Start Point, The Lizard and Land’s End, ahead of the open water passage across the Celtic Sea and the symbolic turn around the Fastnet Rock off the southern coast of Ireland; a rounding that heralds the race’s emblematic moment as the fleet embark on the long return leg and the finish in Plymouth. The defending champion is the double-handed crew of Frenchmen Pascal and Alexis Loison on JPK 1010 Night and Day, whose heroic performance two years ago proved anything is possible. Among the former winners is veteran campaigner Piet Vroon, likely to skipper Tonnerre 4 at the age of 85. If he starts it will be Vroon’s 26th Fastnet, still a few races behind fellow octogenarian Ken Newman. History is also provided by the presence of the 52-ft yawl Dorade, winner of the race in 1931 and 1933. The 46th edition of the Rolex Fastnet Race starts on Sunday 16 August. The first warning signal is scheduled for 11:50 BST.

Video highlights will be available through the competition, commencing with a preview in early August. The Rolex Fastnet Race has been partnered by Rolex since 2001. The event forms a proud part of its association with yachting and offshore racing in particular. The Rolex Fastnet is followed by two more 600-nm races in 2015, October’s Rolex Middle Sea Race and December’s Rolex Sydney Hobart Yacht Race.

For full details of Rolex’s long-standing relationship with yachting a dedicated Press Kit is available in English and Italian.