Yachting News » Events » Results: Superyacht Cup Palma - The Calm After The Breeze
« BACK

Results: Superyacht Cup Palma - The Calm After The Breeze 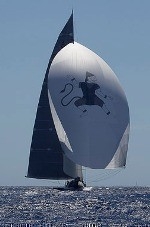 If ever a place ever threw up conditions more perfect for J boat racing over four consecutive days then I’d love to know. Between the smart organization of the race committee, the flat water and breeze that ranged from 14- 19 knots one day, and 12- 15 another, it couldn't have been better. It was as if the J class had ordered the breeze and sea conditions that they wanted by phone and, like a great pizza delivery boy, Palma Bay delivered on time and with all the extras.

Luckily not being Newport, Nantucket reds were thankfully in short supply. All the Js had brought plenty of fire power in the rock star department and, for the most part, permanent crew who by now, have enough races on their boats to be dialled in. To see the final start, from where we had a great vantage point aboard the Bruce King designed Maria Cattiva, was something no sailor could forget. Hanuman, beautifully nailing the pin end start heading to the left side where she wanted to be but, Velsheda, going like the clappers to hit the committee boat side at top speed, was what sticks. Everybody had been slowing themselves down, jockeying for position; to do a long run up at speed is a risky manoeuvre. But hats off, Velsheda, the old girl, proved she is still competitive with constantly improving results every day, finishing on a 2nd. Hanuman dominated. Clearly she is the fastest in these conditions, having been the same in St.Barths, and one would suspect you can read that as all conditions. But she was also sailed well, the only hiccup being an OCS* which became a DSQ** due to not restarting within the four minute window she had. But she sailed on and showed her speed after restarting anyway, and then by passing Rainbow, a boat that has to be a little bit disappointed, as she couldn’t manage better than a 4th, and ended the regatta in 5th overall. She is also the newest J and should have had enough time to be up to speed, but perhaps she just needs a little longer. For sheer pace, Lionheart seems to be the closest to Hanuman on straight line boat speed, at least in these conditions.

What a pity it is that we couldn’t have the recently refitted Endeavour join the fray. But you have to be thankful that five made it and, in doing so, they made history in the Med. One hopes Palma hit every nail on the head, and that this may be that start of a regular date on their calendar. The owners were happy, the crew were happy, the spectators were speechless…. Jim Clark, Hanuman’s owner also gave a very gracious speech. He thanked his crew, he thanked his competitors, naming each boat and their owner by name, highlighting what they’d done for the class. Unfortunately there was some yammering going on but, for anyone who’d actually listened, it was refreshing. This from the man at St.Barths who matched what he spent on racing in the regatta, on crew, on transport etc in a donation to charity. Clearly a special breed of owner. On the super yacht side of things, the first thing that struck me on the first day of the regatta was the huge Dutch presence; in both the J class and super yacht classes. Not just from the sheer amount of yachts built by Dutch yards, but by those designed by Dutch designers, and the amount of Dutch owners, many whom were also owners of non-Dutch built/designed yachts. Given their obvious penchant for good looking vessels and quality, this is no bad thing!

The atmosphere was a great balance of old friends catching up for beers afterwards in the beer tent, with North Sails and RSB Rigging footing the bill on two of the nights. Given the conditions, it seemed that all the crews were avoiding hitting the evening festivities too hard, and by 2100/2200 most evenings the crowd was thinning out, like Cinderella trying to get home by midnight. Most were reasonably bright eyed and bushy tailed in the morning, as people wanted to enjoy the good racing conditions we’d been presented with.

In the super yacht fleet, Hearbeat was class 2, and overall winner, as well as picking up the Hoek cup for best performance by a Hoek yacht in the super yacht fleet. So the owner was very happy indeed. Maria Cattiva, last year’s winner, was this year’s runner up to Heartbeat in class and 3rd overall. Atalante came in 3rd in class.

Class 1 was taken by the Swan 112 Highland Breeze, whose owner was also the gold sponsor of the event, in the form of his company Gaastra. A fact everyone would know as he used his awards speech to do some pretty shameless marketing on his company’s behalf. But he was clearly excited - it was also his second year in a row, and he is sure to be back next year with both boat and sponsorship. Hopefully the success of this regatta across the board will bump up the numbers for next year. The very un-Perini looking Perini Navi P2 came 2nd in class enjoying some good tussling with Salperton, the 45m Dubois sloop who came in 3rd , fresh from her success in Sardinia at the Loro Piana. I should also mention that, across the board, the regatta was very well organised. RNCP*** who have a lot of practice managing regattas in Palma, also challenged the big yachts. On Maria Cattiva the courses set the last two days required 6 kite hoists, and multiple gybes, a good challenge for big boats that was enjoyed by the crew and, most importantly, by the owners. They foot the bills, without them nothing happens.

Perhaps the only criticism is that there was some amount of waffling at the beginning of the prize giving by the two MC’s and, whether they were aware of it or not, few could hear. From the off, the crowd was never really engaged, and hence few really bothered to listen too much to anything that was said afterwards. I would suggest that they call Kenny Coombs, long time MC and organiser of the Antigua Classic yacht regatta. He knows how to engage the crowd, thank the sponsors and get some applause (which makes sponsors feel appreciated), and sets things up for the prize winners to be listened to, should they have something to say. But what really mattered about this regatta was the sailing, which was a resounding success.

* On Course Side (over the line at start)

** Disqualified (so she took points for a last)