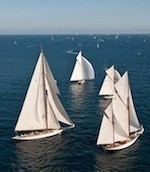 For its 15th edition, from 28 September to 6 October 2013, Les Voiles de Saint Tropez will offer thousands of sailors, skippers and owners of some sublime yachts an idea, a state of mind, a certain experience of yachting and boats, that is coloured by the unique convivial atmosphere synonymous with seafarer gatherings.

Boasting Modern and Classic boats alike, there will be some 300 yachts bringing the Bay of Saint Tropez to life. An annual event, Les Voiles is the spot to witness the magical spectacle of hundreds of yachts hitting the water in a representation of 150 years of naval architecture and aesthetic. The hundred-year old yachts, or those about to score a century, will total around thirty in the wake of the venerable and much revered Partridge (1885), Marigold (1892), Sif (1894), and the 8m Nin, which came into being exactly 100 years ago this year. Four large and sumptuous J-Class Yachts have already signed up for the upcoming edition of Les Voiles de Saint Tropez too. Hanuman, Lionheart, Velsheda and Shamrock V will all be competing in the grand festival of Saint Tropez
A replica of a gunter-rigged racing yacht, nicknamed “the boat of extremes”, has been sailing in nearby Marseille for only a short time. Christened Alcyon 1871, this characterful yacht, which is 9m long on deck but a stunning 21m overall, brings a fresh perspective to the history of racing in the Mediterranean and is sure to be one of this year’s star attractions.

Some new features among the Modern fleet!

No less than a dozen Wallys, futuristic giants combining performance and comfort, will be racing offshore of Pampelonne on a dedicated circuit. The Wally Cento, Magic Carpet, a newcomer in the 100-footer format and fashioned by the Reichel Pugh design studio will, without a doubt, be the focal point for a great many photographers.

Another newcomer to Saint Tropez this year is the latest creation from British architect Rob Humphreys, the elegant Tempus Fugit, inspired by the classic J-Class sloops. Thursday is challenge day. Skippers and yachtsmen challenge themselves at will, against boats not necessarily from the same class, on a special ‘no-stakes’ course. An idea inspired by Patrice de Colmont, its traditional title of “Journée Jean Laurain” will now be associated with the name Dick Jayson, who passed away this year. In 1981 Dick was at the helm of Pride, challenger to the 12mJI Ikra skippered by Jean Laurain and owned by Jean Rédélé, in what was to become the founding race for the Nioulargue, which today goes by the title of Les Voiles de Saint Tropez. A half model of Pride, made by the family specifically for this event, will be displayed in the future Société Nautique Club House in Saint Tropez.

The heart of the event, Les Voiles village…

The event’s hub is a place where hundreds of sailors from across the yachting world, locals and the general public gather on their return from the day’s racing. Among the 21 exhibitors who participate in the entertainment on offer each day in the 2,500m2 race village at the foot of the Harbour Master’s tower, we note the presence of Les Voiles’ new partners, BMW and Edmond de Rothschild Group, alongside some loyal supporters in the form of Rolex, which will have a new 200m2 reception area this year, Kappa, Sillinger and SFS.